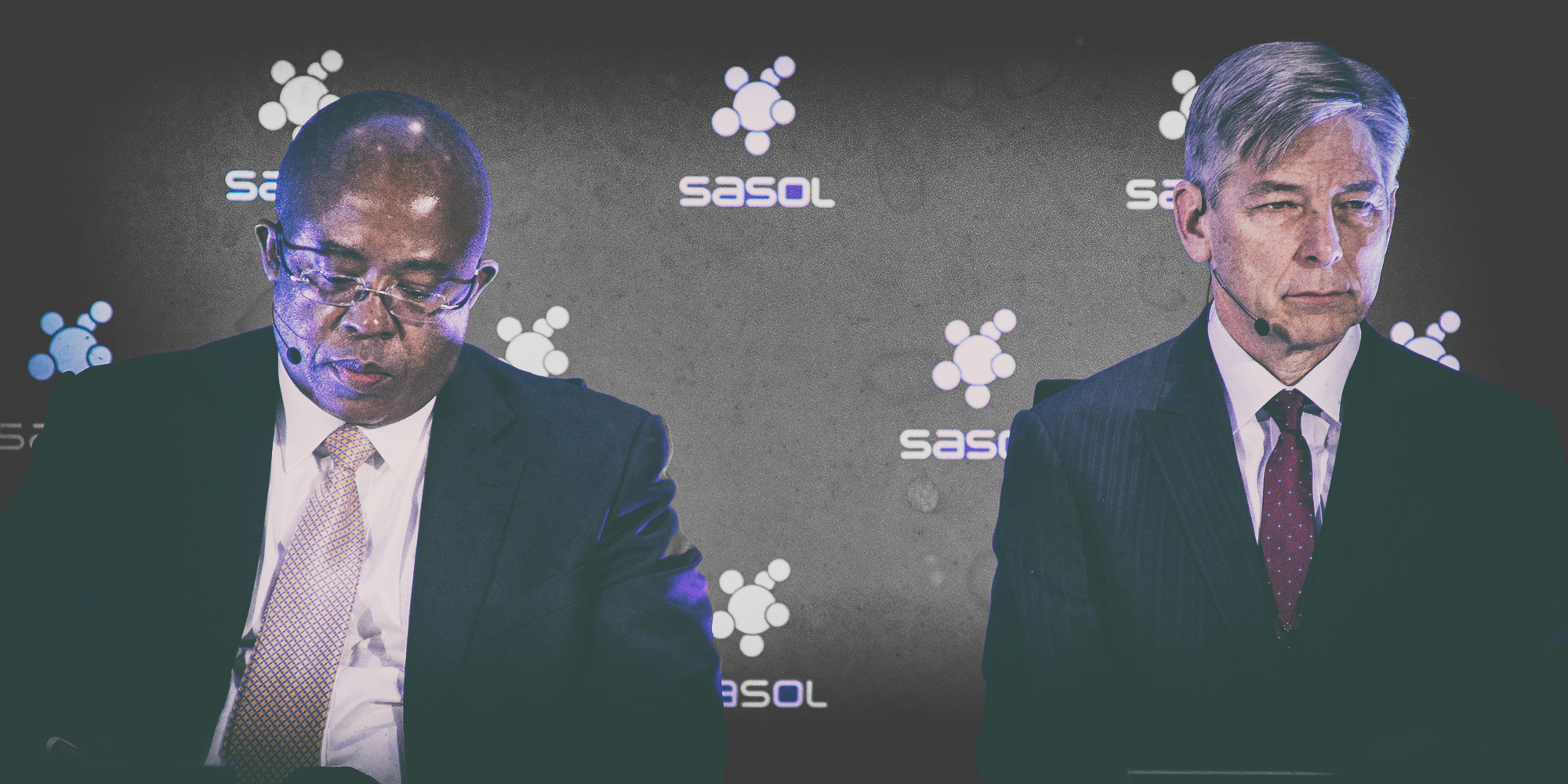 Sasol co-chief executives Bongani Nqwababa and Stephen Cornell were sacked after a forensic investigation into the delays and cost overruns at its $ 13-billion Lake Charles Chemicals Project.

Shares in chemicals and gas-to-liquids producer Sasol surged the most since 1999 after the company fired its joint chief executive officers and canceled a final dividend payment as it searches for gas feedstock to reduce reliance on coal.

The share surged more than 15% and reached a high of R307.69 during trading in Johannesburg, according to data compiled by Bloomberg. It closed at R298.74 on Monday, 11.78% higher than the previous close. This values ​​the company at R167-billion. All in all, Sasol has lost 51% of its market value over five years.

Earlier in the day, Sasol, which is also listed on the New York Stock Exchange, announced it had parted ways with Bongani Nqwababa and Stephen Cornell, its joint chiefs since July 2016.

Sasol fired the duo after a forensic investigation into the delays and cost overruns at its $ 13-billion Lake Charles Chemicals Project (LCCP) in Louisiana showed that the project management team, which reported to the duo, had “acted inappropriately, demonstrated lack of competence and was not transparent. The board believes these factors compromised the ability of the various LCCP governance structures, including the board in relation to LCCP matters, to perform their oversight role effectively on behalf of shareholders, "said Sasol chairman Mandla Gantsho in a regulatory statement.

Gantsho told reporters that the project management team at the LCCP had presided over a culture of fear, preventing staff from timeously reporting problems with the 70-year-old company’s largest investment ever.

"However, on balance, the board finds that there is not sufficient evidence to conclude that these individuals acted with an intent to defraud. "

While the investigation made no findings of any wrongdoing against Nqwababa and Cornell personally, it felt their departure would be required in order to ensure there was accountability and to restore trust in the company, said Gantsho.

The two will be replaced by Fleetwood Grobler starting in November. He was initially appointed to replace the LCCP project management team in February.

Delays and bad project management have inflated the original $ 8.1-billion investment in LCCP to almost $ 13-billion.

This made Sasol the largest foreign investor in the state of Louisiana, where it was drawn by abundant shale gas in the Gulf of Mexico, which it can convert to vehicle fuel, fertilisers and plastic packaging components.

"Some of the driving factors behind the cost and schedule increases are common in projects of the size and nature of the LCCP, but some are shortcomings that may have been avoided, ”said Gantsho.

While the project was initially planned to reach beneficial operation in 2018, Sasol said it was now only about 90% complete.

Sasol decided to cancel paying a final dividend in order to conserve cash while the LCCP ramps up to full beneficial production. This means Sasol was only able to pay the interim dividend of R5.90 per share, dropping total dividend for the year by 54%.

Finance director Paul Victor said: "To protect the investment grade of this company, we had to take the very difficult decision to pass the final dividend."

Asked whether this would have any impact on jobs, particularly in southern Africa, where Sasol currently gets most of its revenue in South Africa and Mozambique, Grobler said it was too early to say, as there is a possibility that jobs may be lost when it exits carbon-intensive assets, but jobs may be gained when it enters gas assets.

Sasol has large operations in Mozambique, where it has been pumping oil and gas from the Rovuma Basin. Most of the gas is imported to fuel its operations in South Africa, where it produces about 70% of its own electricity needs from gas.

The company, which was established in 1950 by the apartheid government to convert coal to vehicle fuel in order to bypass the negative impact of international sanctions against apartheid, says coal will remain a large part of its core operations until at least 2030.

"We cannot get away from the fact that the coal assets are still an integral part to Sasol’s business. It may be reduced slightly, but will still be significant going into 2030, "said Victor.

This carbon reduction roadmap means Sasol will focus more on its gas-to-chemicals business as it enjoys a more competitive advantage there, said Grobler.

"The search for gas feedstock will be enhanced. Gas is a long-term exploration and we will focus on that.

"We will consider multiple options for gas that span from the South African coast and into Mozambique. " BM

Please note you must be a Maverick Insider to comment. Sign up here or if you are already an Insider.