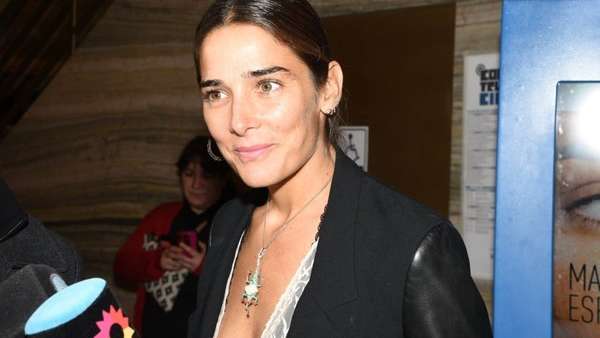 As part of the premiere of the film "Sinuous Road" by Juan Viale (38) with Arturo Puig, whose premiere took place last Thursday, the actress gave several interviews, in which she not only talked about her current work, but also about the economic situation and took advantage of the occasion to explain: "I'm not a feminist, I do not believe in feminism as a flag."

These statements have caused controversy in social networks and have aroused criticism from many users.

One of these releases comes from Futurock's co-director Julia Mengolini (36), who took the opportunity to defeat Ronnie Arias (56), who a few days ago presented misinformation about the 33rd National Meeting of Women,

The journalist wrote on Twitter: "They are so disgusting that they are embarrassed, and the worst thing is that they are supposed to be cool, they return for a thousand years with their ignorance".

Juanita Viale is not a feminist "because we are all different" and Ronnie Arias complains that we burned the dog at Trelew. THEY ARE THIS BRUTOS, which is embarrassing. And the worst is that they are supposed to be cool. They delay their ignorance for a thousand years. ??♀️

In dialogue with the program Saturday modefrom National radioViale responded to the criticism: "I do not know who Julia Mengolini isbut everything is fine. "

This is not the end, the actress questioned the saying of Mengolini: "Not even vulgar: he said it because he was cool … I do not know what it means to be cool. First of all, I translate this in my own language because I speak Spanish and I'm an Argentine, I was born and raisedBut if you think I'm a brute, your intellect must certainly be much wider than mine, and I will be fat next to it. Yes, nothing happens … But I'm solid. "

Accustomed to this type of round trip with those who think about their work, personal life or sayings, Viale defended herself: "I understand that people do not agree, but I am talking about me, I'm not talking about anyone. I do not want to generate conflicts"

In addition, she was consulted with a few comments about social networks that she thought was contradictory that granddaughter Mirtha Legrand should act as a "non-feminist" but defend the legalization of abortion in Argentina: "Legalization of abortion does not speak about any banner of feminism. It's a law that must go hand in hand with women. I do not need to be a feminist to want it. There are many men who want the law to work out and are not feminists – he said.

The one that traveled the media did not end up with Juan Viale, tonight he will be a guest at the table of his grandmother, Mirtha Legrand.

What will "La Chiqui" say about the criticism of her granddaughter?