Europa League: Arsenal a size too big for Rapid 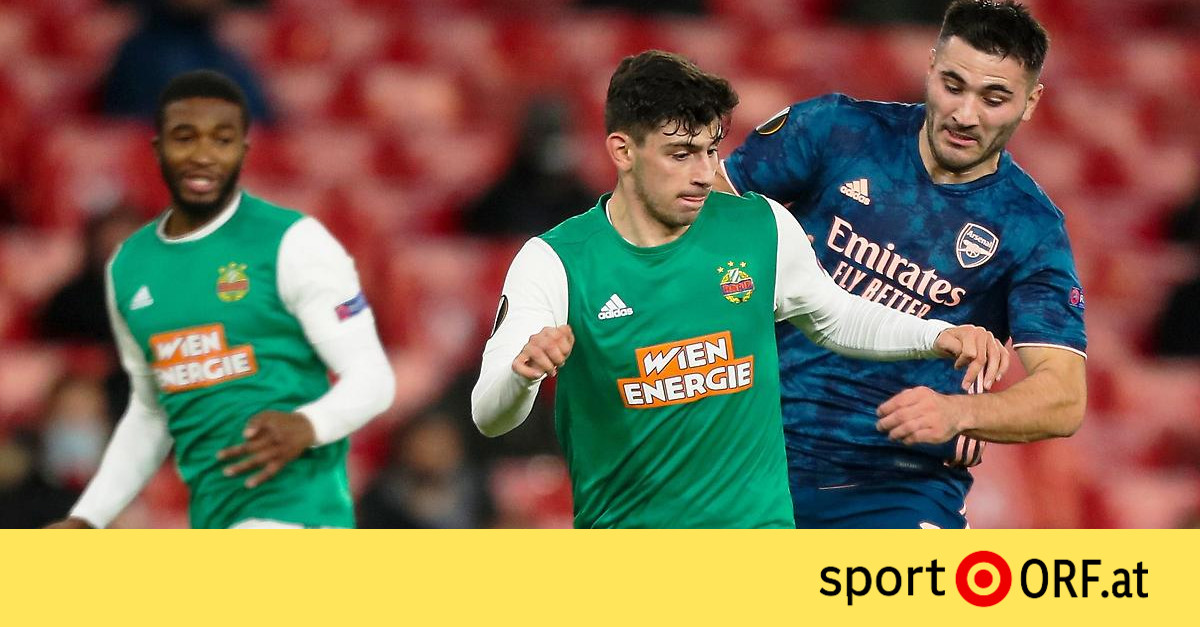 Alexandre Lacazette (10th minute) with a powerful long shot, Pablo Mari (18th) and Eddie Nketiah (44th) gave Arsenal an undisputed 3–0 lead in 14th in the English Premier League in the first half. Swift Defense had nothing effective against the Londoners’ swift direct football. A goal by Koya Kitagawa in the 47th minute helped Rapid improve the score. Emile Smith Rowe scored 4-1 in the 66th minute.

For the “Gunners” it was the fifth victory in the fifteenth match, Rapid, however, lost the third defeat, but still has a chance to advance to the sixteenth final. Despite the clear defeat, Rapid’s home game against Norway’s Club Molde next Thursday (18:55) still holds: after a 1-0 win or every single win against Molde after a 0-1 defeat in the first leg, you are in the knockout stage of the League Europe in the spring. Molde defeated Dundalk 3-1 from the Irish side in a home parallel on Thursday.

Fast against Arsenal with no chance

Rapid did not have a 4-4 chance against Arsenal on Thursday. Nevertheless, the Hütteldorfer still have a chance of promotion.

The “Promotion Finals” cast a shadow ahead

Right from the start, Rapid was purposely headed towards the “promotion final” against Molde next Thursday. The outcome of the match at a traditional London club was almost negligible. Therefore, the trainer Dietmar Kühbauer also experimented with the composition. Deni Alar, who has only played 23 minutes in the Bundesliga this season, was able to play in the storm alongside Japan’s Kitagawa.

Group B: schedule and table

But the coach of the Gunners Mikel Arteta also mixed vigorously. The team had nothing to do with the side that lost 2-1 at home to Wolverhampton over the weekend. For example, Lacazette played offense instead of Captain Pierre-Emerick Aubameyang. “We’re looking forward to the game, hopefully you’ll see it too,” said Burgenlander before leaving for London. His wish did not come true.

After the initial stage without any major scenes, Lacazette’s 35-meter shot suddenly hit the net for a 1-0 (10th) behind Richard Strebinger, who this time played again in place of Paul Gartler. Strebinger was surprised by a shot, stood too far in front of the goal and then misjudged himself as he tried to defend himself as the ball turned away from him.

Quick powerlessness against the attacks of Arsenal

When Mari turned to the far corner to 2-0 (18th place), Strebinger was powerless this time, but Maximilian Hofmann let the scorer pass unhindered. On the contrary: Captain Rapid even winced and turned away from the ball. The 2,000 Gunners fans who were allowed to play in England for the first time since March did not care. They applaud the new score with delight. Like Lacazette’s shot from a pole in the 27th minute.

After around 30 minutes the Londoners allowed the game to cool down, Rapid showed up for the first time with a few players in the opposite half, but there was nothing he could do about that room. Unlike Arsenal. Shortly before the whistle whistle, the Gunners joined with One-Touch Football through the ranks of Hütteldorfer to the end of Nketiah from the penalty mark. Strebinger was able to counter the first attempt with one hand, but was unable to head the second attempt to 3-0 (44).

Kitagawa also knows where the gate is

The third Austrian from the Bundesliga did not have a shot on goal until the break. Rapid started the second half with a goal. First Kelvin Arase hit defender Sead Kolasinac twice in front of the line, then Kitagawa was able to adjust to a 1-1 rebound (47th) in the goal.

However, the goal did not make a change to Rapid. Arsenal pressed 4-1 again and the green and white defense could hardly counter. With a head in the 58th minute, Strebinger was able to stand out from a Nicolas Pepe shot, Stangl’s pass in the 65th minute did not help either.

In the 66th minute it was time. Smith Rowe, who had just been substituted, came in after Ainsley Maitland-Niles pass from suspicious position to 4-1 for the score 4-1 (66th). As there is no video referee in the Europa League group stage, the goal was considered unrated.

Which ÖFB clubs are promoted?

Arsenal continued their charge, led by Deputy Dani Ceballos. Nothing came of it. Strebinger continued to excel in the Ceballos (80th) free kick. The English audience was pleased with the next game at the stadium and applauded their own team. There was no applause for Rapid. Hütteldorfer can pick him up on Sunday (14.30) in the league outside Hartberg.