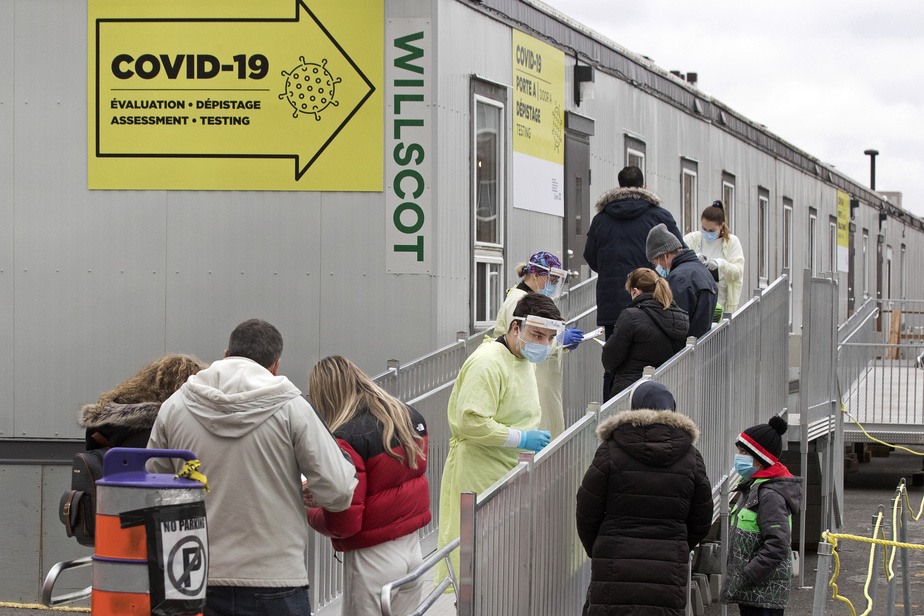 According to Saturday’s report, Quebec has experienced a record increase in 2,031 new COVID-19 infections, in addition to recording 48 additional deaths. Even if it is overstated by the revision of the data presented the day before, this new summit worries the consulted experts press.

According to the National Institute of Public Health of Quebec (INSPQ), part of the significant increase in the number of cases announced on Saturday would be due to “catching up on cases identified the day before that could not be addressed on time”, can we read on its website on Saturday morning .

The balance released on Friday was actually incomplete. He only had 875 confirmed cases on December 3. However, the impressive numbers released on Saturday include a correction of 571 consecutive cases for that date, which is unusually high. Initial assessment as of December 4 is now 1,365 new cases per day. This number can be expected to increase in the coming days.

The numbers reported each day are less representative of reality than the average of last week’s new daily cases, recalls Nathalie Grandvaux, associate director of science at the CHUM Research Center. The average over the last seven days is 1,466 cases and has been steadily increasing for just over two weeks.

This recent rise in COVID-19 cases can be explained by the rise in the number of people under the age of 70 over a week. People between the ages of 0 and 69 actually showed strong growth within one to two weeks. Only the elderly showed a slight downward trend last week (-6%).

The experts are worried

“It is very disturbing, but nevertheless confirms Roxane Borgès Da Silva, professor at the School of Public Health at the University of Montreal. Especially because of the effects these new cases herald hospitalizations and deaths within a few weeks. ”

Are the measures in place sufficient to protect our vulnerable populations and our health systems?

Roxane Borgès Da Silva, professor at the School of Public Health at the University of Montreal

As the number of new daily affairs in the province continues to increase, the possibility of introducing more stringent measures should be considered, she said.

According to Benoît Mâsse, professor at the School of Public Health at the University of Montreal, this spectacular increase in the number of cases can be explained in part by the large number of tests performed. The 35,391 samples recorded on 3 December are among the most abundant since the start of the pandemic.

“The positivity has slowly increased from 4% to 5% since November and we are now approaching 5.5%. It’s a kind of fake vessel that rises slightly, ”she notes.

Hospitalization fell on Saturday, from 754 people currently hospitalized, 7 less than the day before. Currently 96 people are in the intensive care unit, a decrease by 1. During the week the number of hospitalizations increased by 89, ie by over 13%.

It will “explode” in a larger area of ​​Montreal

The Greater Montreal region has the highest number of new cases. Montreal Island has 630, while Montérégie has 263 and Laval 166, the Capitale-Nationale region reports 304 new cases. Saguenay – Lac-Saint-Jean has 137 of them.

A week after “Black Friday”, Mr.me Borgès Da Silva wonders if the marked growth in big cities is due to holiday shopping.

How is it that it explodes like this in big cities?

Roxane Borgès Da Silva, professor at the School of Public Health at the University of Montreal

Montreal and Montérégie have the most deaths after 12. Lanaudière has 6 while Capitale-Nationale recorded 5. Saguenay – Lac-Saint-Jean and Chaudière-Appalaches each have 3 deaths, and there are 2 in Outaouais and Maurita and Center-du -Québec. There was only one death in Laval, with Laurentians and Bas-Saint-Laurent. The other regions did not register any on Friday.

The minister asks for an extra effort

Health Minister Christian Dubé called on Quebeckers to make extra efforts to help reduce the number of new cases. “Anyone can make a difference in the days ahead,” he growled in an interview with Radio Canada on Saturday.

He noted that thanks to the seizure of power, the residents of Saguenay-Lac-Saint-Jean managed to reduce the number of cases by two-thirds in the region. He is hoping for the same result across the province by the end of the class on December 17th.

Follow the progress of the pandemic in real time on our interactive graph page.