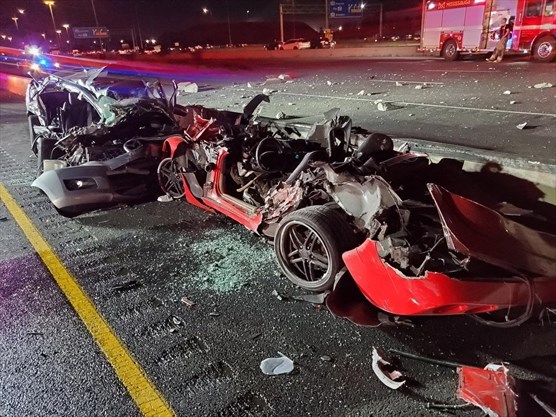 Two people are dead after a collision of three vehicles on Sunday evening in Mississauga on Hwy. 401, police said.

East Hwy. 401, which closed on Monday morning, opened after the crew cleaned up the stage.

All expressways are open in Hurontario. Drivers have access to most collector's belts in Hwy. 410 and Hwy. 403 ramps, except for the left collector's lane, OPP spokesman Sgt. Kerry Schmidt said Monday afternoon.

The collision took place around 21:30 and involved three vehicles, including a transport truck, on Hwy. 401 near Dixie Rd.

The first reports indicate that the driver of the red Corvette driving east 401 made an aggressive lane change before locking the transport truck, said Schmidt.

When the vehicles collided, a transport truck ran over a concrete wall, rolled on the expressways and caught fire, he said. He added that the median between express lines and collectors was "massive".

Schmidt said two Corvette passengers were taken to hospital, where a 34-year-old driver was declared deceased. One of the two passengers in the second damaged vehicle, a 77-year-old woman, also died in the hospital.

Schmidt said that since then three people who were taken to hospital as a result of a collision were cured and released.

As a result of the collision, some people crossed the wrong road on a highway or green fields to bypass Sunday.