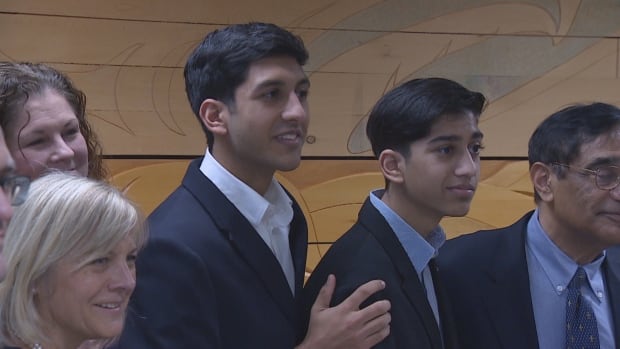 After enduring discriminatory comments about their religion at school, two West Vancouver brothers did something to dispel what they call perceived stereotypes about Islam.

Kian Lalji, 17, a 12th grade student at Sentinel Junior High School and his brother Razaan, who is in grade 10, organized an event entitled 'Understanding Islam in a World of False News and Stereotypes' on Sunday.

Kian said the genesis dates back to when he was in grade 8, and another student asked him if he was a terrorist.

"At first I laughed at it … but later I realized that it wasn't a joke," he said. "People shouldn't be stereotypes, especially at a young age."

This incident, together with the constant perception by the brothers that Islam is too often portrayed negatively, prompted them to start organizing this event. They wanted an environment where people from all walks of life could talk to each other and ask questions.

"It's really unfortunate that the mentality that is there … if your skin is brown, you are more likely to be a terrorist," said Razaan Lalji. "It's a terrible thing and all we can do to raise this image … is good."

They recruited Ali Asani, a professor of Indo-Muslim and Islamic religions and cultures at the University of Havard to speak at the event. His research focuses on the traditions of Neck and Sufi devotion in South Asia.

Asani, who had known Kian Lalji since he was born in Boston, spoke at the party about the importance of accepting and trying to understand others, even if they are different.

"Because by stigmatizing one particular group because of religion, race or ethnicity, etc., you are actually destroying the tissue of democracy," he said.

He says events like this organized by the Lalja brothers help people to be more careful about the differences between people, which he describes as the basic feature of being human.

Kian Lalji used this event to talk about the similarities between different religious groups and societies.

"Islam has values ​​similar to Canadian values, such as generosity or mutual understanding," he said.

The brothers hope that elements of it will eventually be included in school curricula.