Abortion: The Church and the Ministry of Health present concepts demanded by the Constitutional Court – Courts – Justice 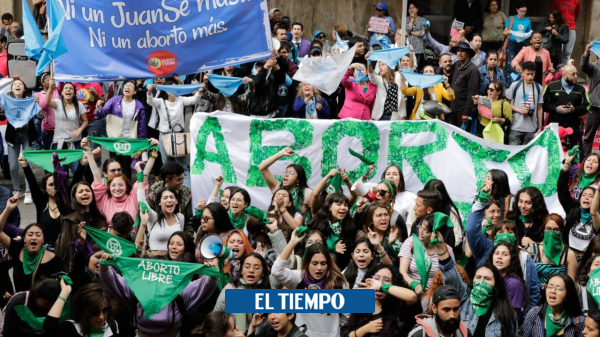 On behalf of the Catholic Church the right to voluntary termination of pregnancy does not exist. In the case of the Ministry of Health – as per a concept signed by one of its officials and sent to the Supreme Court – although this right is recognized in the three cases allowed since 2006, extending this guarantee beyond these reasons means allowing “Irresponsibility” of women.

These two statements, which are part of the concept that the Bishops’ Conferences and a Ministry of Health official sent to the Constitutional Court during the trial by the Just Cause movement, They are contrary to the jurisprudence of the Supreme Court.

In the case of what the Church has said, the Court referred to voluntary termination of pregnancy in various judgments as a fundamental right on three grounds allowed.

And in the case of what the Ministry of Health maintains, in a document signed by the entity’s lawyer Joaquín Elías Cano Vallejo, The Supreme Court issued rulings in which it prevented the authorities from making such statements to question women’s decisions to terminate pregnancy with moralistic arguments.

The concept was so controversial that the same Ministry of Health issued a a statement in which he denied this document said he would present another, and pointed out that what was said there corresponded to the personal position of the official Cano Vallejo.

But why are both the position of the Bishops’ Conference and the one sent by the Ministry of Health so controversial?

(You may be interested in: “ There must be a debate in Congress on the criminalization of abortion ”).

The right to abortion exists in three cases that are allowed

The Bishops’ Conference, on behalf of the Catholic Church, opposed the Just Cause process, stating that the right to life from conception to death must be protected.

To expand on this argument, the Catholic Church makes statements contrary to what the Constitutional Tribunal said, unaware that the first decision recognizing the right to voluntary termination of pregnancy (IVE) was 2006, when three reasons were admitted: threat to the mother’s life or health, fetal defects or rape.

(Read also: The government is opposed to a trial that seeks to eliminate the crime of abortion)

This is ensured by the latest, from 2018 The fundamental right to IVE protects women’s autonomy and freedom of decision that she is pregnant and meets at least one of the reasons allowed by the Supreme Court. As “fundamental”, the Court affirms, this right – which is related to reproductive rights – is obligatory for the state to respect and exercise.

“Since IVE is partially decriminalized and qualified as a fundamental right, this Corporation’s audit chambers decide on its content as an overriding guarantee, in accordance with the provisions of judgment C-355 of 2006.” The Supreme Court stated in a 2018 ruling.

(We invite you to read: Human Rights Watch is asking the Tribunal to decriminalize abortion in Colombia)

Despite all this jurisprudence, the Catholic Church assures in its conception sent to the Court that the fundamental right to IVE does not exist and argues that in its 2006 judgment, in which abortion was partially decriminalized, and in 2018 in which the highest court refused to set a limit of weeks for this internship, what was said in the San José Pact was not taken into accountwhich speaks of the right to life from conception, nor has the will of Congress been taken into account.

Although the Court has repeated this in its rulings for 14 years, The Bishops’ Conference affirms that “there is not a single provision in the political constitution this allows us to conclude that there is such a fundamental right to abortion “, to which she believes that since there is no such right, there is no violation of this guarantee by the state, contradicting the barriers that the Constitutional Tribunal itself pointed out in its judgments, such as that of 2018, in which he said these obstacles were a form of “violence against women.”

In the past, when assessing probation for erroneous information about the right to IVE, the Constitutional Court disciplined (although at least it was directed against state institutions) for such judgments. E.g, 10 years ago, the Constitutional Court rebuked the then Prosecutor General Alejandro Ordóñez: today ambassador to the OAS for refusing to obey orders of the Supreme Court by failing to preside over the right to abortion and women’s sexual rights.

(Read also: Data that the prosecutor’s office provided to the Tribunal about abortion as a crime)

In 2012, the same court reprimanded Ordóñez, when dissolving custody of 1,280 women and ordered him to withdraw for providing false information or inaccurate about women’s reproductive rights in this country and abortion.

Among the misinformation provided by the Ordóñez General Prosecutor’s Office was the finding that the 2006 ruling, which partially decriminalized abortion for three reasons:

At least two years ago The Constitutional Tribunal ordered the Ministry of Health to issue a regulation guaranteeing access to voluntary termination of pregnancy –since the judiciary corporation has recognized that there are systematic barriers that women face in accessing this procedure, this portfolio has not issued such legislation.

In October last year, the Ministry issued a draft of what the regulation would be, but then asked the Court for more time to comment, a deadline that expired in May this year, and this document was not known so far. In fact, accepting the Just Cause claim for consideration, the Constitutional Court asked the Ministry 18 technical questions and asked the Ministry to clarify whether it had already complied with the instructions it had issued on the IVE Regulation, ratified in two judgments: one from 2009 and another from 2018.

(Read also: 162 The Court asks questions in admitting its lawsuit against the offense of abortion)

The Ministry of Health has not yet replied to the Court of Justice to its technical arguments on abortion and to the questions put to it by the Supreme Court. Instead, he sent Opinion of the official Joaquín Elías Cano Vallejo, in which he asked to reject the Just Cause request.

Therefore, who was disqualified by the Ministry of Health on Tuesday, assures that the movement’s postulate, rather than decriminalizing abortion, wants to “allow abortion without restrictions (…) a woman, in the absence of conscience and in the face of irresponsibility both men and women at the time of sexual intercourse and before it, “can terminate the pregnancy.

Under this Ministry concept, which was later discredited, the couple should “rather, focus on the use of multiple rules and methods of contraception or family planning, and not transforming abortion as another mechanism for that planning. ”

It also states that abortion, if requested beyond the three permitted grounds, means “sacrificing a child’s life to rectify a mistake made by two adults as a result of irresponsible behavior.”

And he adds that the ultimate goal of the lawsuit is “to grant free leave to women who
lack of discipline, care, prophylaxis, or proper application
existing methods of family planning or contraception can begin to remedy these mistakes or omissions when this should be anticipated before, not after, the act.

However, those positions where Cano, on behalf of the Ministry of Health, challenges the “irresponsibility” and “lack of conscience” of women have not obtained the approval of the Constitutional Tribunal. One of the last decisions in which he ensured that these arguments could not be debated was made during the examination of an order issued by a judge to investigate a minor for attempting an abortion.

When certifying copies for a young woman to be criminally examined, the judge said that “being a recipient of reproductive rights, he has to make free and informed decisions about procreation, the guarantee she had for the moment of intercourse with a partner and getting pregnant ”. The judge also assured that the pregnancy was “a consequence of not using contraceptive methods to avoid reproduction”.

(Read the context: Serious court order to examine a minor for the crime of abortion)

In this case, the Court not only ordered the annulment of the decision ordering criminal proceedings against a young woman, but also recalled that the authorities must be held accountable in such situations, as “It is unwise to blame a minor for the consequences of lack of care and planning in their sexual relations”. He also said that there is a “deficit in the implementation and dissemination of sexuality education programs,” so it may be unreasonable and disproportionate to make this kind of moral judgment in the face of actions that lead to pregnancy.

Another point where the failed concept of the Ministry of Health contradicted what was said in the same case law is where asks questions about how much life is worth more or less and ensures that this assessment is the one for which this new suit is concerned, stating that what is being asked of the Court is to conclude that the mother’s life matters or is worth more than the life of the mother to be born .

But this dichotomy raised by the Ministry of Health contradicts statements made by the Constitutional Court itself, such as the 2016 C-237 judgment, in which reminded that the legal existence of people occurs at birth, the moment at which it can be considered an effective rightholder of rights and thus of the fundamental right to life.

(Be sure to read: International entities and Bogota’s mayor’s office are asking for the decriminalization of abortion)

This does not mean that the unborn child has no protection whatsoever, but that, according to the Supreme Court, a distinction must be made between life as a value or constitutionally protected good, available to the unborn child, and life as a fundamental right that is available from birth.

Case law of the Court, recalled in the 2018 judgment, determined that the embryo does not belong to the category of a human person or a person entitled to life, rather, it is a “higher good object of protection”.

These statements by the Court, placing the mother’s life on a different plane than the life of the one to be born, they are omitted from the concept sent by the Ministry of Health, for example, by providing that allowing an abortion under the conditions in which the lawsuit demands would be legalizing “the violation of what is really a fundamental right, such as the right to life, by handing over solely women by preventing the birth of a person belonging to a particular group, that is, the family of the mother or father, or both, a fact that would violate the International Convention on the Prevention and Punishment of the Crime of Genocide ”.

On the other hand, ignoring the same barriers that the Constitutional Court revealed in several rulings – such as the one that ordered the regulation of IVE – the Ministry assured in this concept that there was no inequality between men and women in the right to their health. .