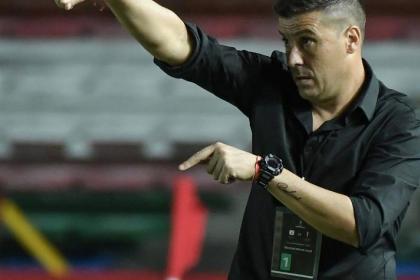 Super League with Junior was lost; it was with Copa Libertadores; he was also unable to enter the South America Cup; three consecutive defeats in the league… What is América de Cali doing wrong? Well, coach Juan Cruz Real believes the arbitration has hurt his side this Saturday, throwing Rodrigo Ureña out of Nacional who returns the winner to Medellín after 1-2, prompting him to close the BetPlay League quarter-finals at Atanasio Girardot.

Before analyzing the mistakes his team made, the Argentine coach said: “I will try to be careful with what I say, I think the team until 27 minutes when we got a suspension was better than Nacional in the match, control, we had arrivals, we dominated the opponent, and The truth is that after 27 minutes there is something going on that I as a coach cannot understand, I was a bit surprised because the same referee who directed us seven days ago is guiding us again and at this point the player sent us back too, I don’t like to talk about referees, but I have to do this because I think my players were very good, they made a lot of effort beating the opponent and playing not for exclusion, because we saw again that the player has to support his foot because he is doing without supporting the other feet “.

Cruz Real added that “I am surprised that there is a VAR because if it is not there it can raise doubts. And there it conditions you, today in football with a man minus 60 minutes is a lot, and this is not an excuse or anything, I just want to say that my players are lions, I think having one player less opponent He barely put us in the goal , he had the ball, but for 37 minutes we played eleven for eleven and the truth is that you could see an aggressive team picking up the ball from the opponent’s field, filtering the passes, reaching it ”.

The Argentine stressed that “the truth is that it hurts me a lot that such things are happening with arbitrations because they harm not Juan Cruz Real, but the institutions, I do not know if they are a bit upset with everything that is happening in Colombia now football but I think they should be careful because it makes us distrust even more what is going on, anyway it’s an open draw, it’s a 180 minutes game, it’s the same as ending the first half with a loss 2 “As I see my players, I blindly believe in them, so besides the bitter drink we have today for our anger at injustice, we’re going to go with all our guns to seek qualification in Medellín.”

On what he has to do to end the mistakes that have become repetitive in the last minutes, he said that “the team has adapted to the great advantage of the rival of being with the player for a long time, unfortunately in the last game we are filtering the ball behind our backs. which of course the rival also plays and wants to do, I think there are both sides, there is something that needs to be improved on our part and the merits of the rival too, but I think my players were intelligent, 70 minutes from One less is a lot, but the key it’s open I remember that on another occasion Barranquilla won 2-1 and we couldn’t get the advantage then; We are in the same situation today and I have great confidence in my players ”.