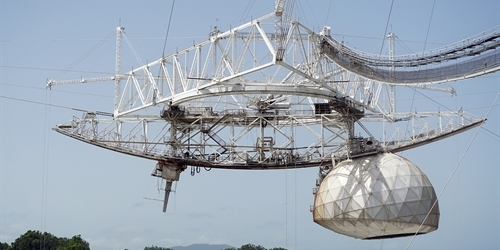 The radio telescope has crashed

Updated on December 1: The entire platform with detectors weighing 900 tons collapsed today. According to a recent statement, the radio telescope was due to be withdrawn due to the poor condition of the ropes supporting the platform. According to experts, the repair was risky. A petition has been submitted calling for the rescue of the radio telescope. But it’s too late for that …

After the Hubble Telescope, it was perhaps the second most famous astronomical instrument in history. Arecibo Radio Telescope has been involved in many discoveries and has also starred in numerous movies and series – Doctor Who, Act X, contact ay.

The Puerto Rican legend is over. It is not a question of money, but a technical condition that is so bad it would be dangerous to repair.

Hundreds of tons above the ground

The radio telescope consists of two basic parts. The first is a gigantic slab with a diameter of 305 meters and 40,000 panels measuring 1 x 3 meters. An antenna reflects a signal from space just like a satellite receiver’s dish reflects a signal from a geostationary satellite. On the plate, the detector is suspended on a metal rod a few dozen centimeters from it. With Arecibo, everything is obviously more complicated.

The detectors are placed on a platform at a height of 150 meters on the plate. The platform weighs 900 tons and is suspended on ropes suspended from three reinforced concrete towers.

The radio telescope has been operating since 1963. In the mid-1990s, a structure called the “Gregorian dome” containing other devices was added. Therefore, auxiliary steel ropes were added.

In August, the auxiliary rope slipped and fell onto the plate. There was relatively large damage to the plate and platform parts. The National Science Foundation commissioned a thorough inspection of the entire radio telescope.

It was planned to install two new auxiliary ropes and two temporary ones. The main ropes were also checked. From each tower there are four main lines, 8 cm in diameter and weighing 7 tons. The ropes consist of 160 steel wires braided together. One of the ropes showed that several wires were broken but this was only a fraction so this was not rated as high risk.

However, on November 7 at 19:39 local time, the radio telescope’s fate was sealed. The main rope broke. Nobody expected a similar development.

There is a concern that other main lines may be broken more than we think. Arecibo is not in ideal geographic and climatic conditions. During their lifetime, the ropes and the entire structure faced moisture, hurricanes (one of which damaged the radio telescope in 2017), and earthquakes.

With the help of Arecibo, in 1992, Aleksander Wolszczan, an astronomer of Polish origin, discovered the first planets outside the Solar System – on a pulsar. Speaking of pulsars. Arecibo played a historic role in the study of these fascinating supernova remnants. It was here that the first double pulsar was discovered in 1974, and in 1982 – the first millisecond pulsar.

In 1974, a famous message was sent from Arecibo to potential audience of aliens in the globular cluster M13. You may have had a piece of Arecibo at home. A lot of data for the SETI @ home program just came out of it.

The radio telescope studied the rotation of the planet Mercury. He also studied the Earth’s atmosphere or “sensed” asteroids as they flew around the Earth.