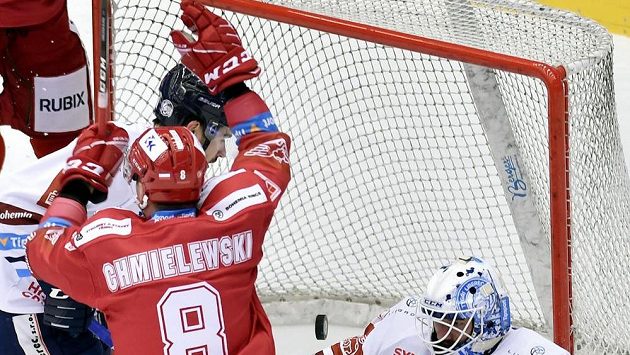 Gol Třinec. From the left, the author of the goal Aron Chmielewski and beat Liberec goalkeeper Jaroslav Pavelka.

For the first time, steel workers broke the regular turn of goalkeepers after one match and left Štěpánek on the goal, who last time won a clean sheet. On the other hand, after a year and a half, he appeared in an extracurricular match between Pavelka’s three Poles and was completely out of work for a long time. He has not scored yet, and Liberec was leading 2-0.

The score was opened by Rosandič, whose shot by Jaroměřský directed beyond the reach of Štěpánek. The hosts also scored a second goal. Filippi was looking for a strong game in front of Gríger’s goal, but Musil kicked the ball out between Štěpánka’s concrete.

It could have been even worse with the steelworkers. At the end of their numerical advantage, they forgot about Philippa, who jumped straight from the penalty bench to escape, but only dusted Štěpánek’s concrete and forced it through. Bulíř lost another great chance.

For the steelworkers who scored the first time in the ninth minute, the third came out. Chmielewski lowered himself close, after another pressure from Růžička he hit with the stick. However, the hosts managed to calm down after successfully connecting before going to the cabins. After several passes, Adamek scored an empty goal at 19:46 with one touch.

The entrance to the central part also belonged to Trzyniec. Crow pushed the puck into the drive, circled the defenders and changed the forehand loop between the concrete to 3-2. The whole situation was checked by the video referee and found a shot where Pavelka kicked the puck with his left foot behind the goal line.

Liberec equalized in the 33rd minute. Rosandic caught the attention of several opponents and released a lonely Lenka who was right in the ring. The hosts took the lead to their side in the power game. Hrň’s shot was fired from the air on the edge of Stránski’s goal area.

Třinec rebounded at the beginning of the last period, in contrast to the two goals from Jaroměřski’s blue line goal, and he kept his eye closely up for a long time. He also defended three weaknesses, but the visitors shrank from the inconspicuous action in the 58th minute. Knot pushed out of the blue line.

Liberec decided to play without a goalkeeper two and a half minutes left, but Douder soon joined the sixth goal. Later, host Zadina, who celebrated 21 years on the day of the match, also hit the post. For the second time this season, steelworkers defeated Liberec.