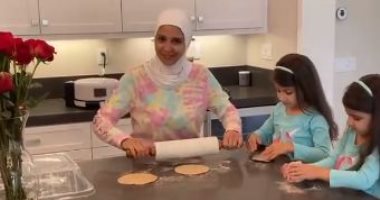 Mu’tazil’s star, Hanan, left her audience with a new video of her and her twin sisters “Maryam and Mona” through her account story on the “Instagram” page and appeared during the recording as she was making bread for breakfast for them and also attended finally, with a photo of their breakfast attached to it, “no Sweeter than a good breakfast in the morning. Hanan Turk and her daughters 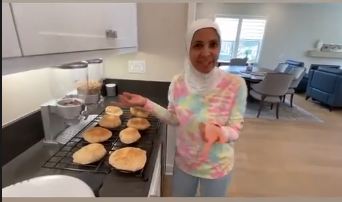 Mu’tazil’s star Hanan Turk reappeared on social media after a two-year hiatus and removed all of her photos from her Instagram account in August 2018.

But now things have changed a lot as Hanan Turk shares new photos of himself at sea with his fans every day.

She also sent a number of messages to her recipients, including the need to pay attention to the elderly and not embarrass them. Hanan wrote on her Twitter account: “Don’t embarrass the elders and test them in their minds … say hello to them, say your name and know it, because forgetting is painful. If their memory has betrayed them, don’t do it. Literature betrays us.

Hanan Turk warned her audience and followers about the fake pages bearing her name and attributed to her on Facebook, and tweeted through her Twitter account: “Unfortunately, many Facebook pages are in my name and I am not responsible or responsible for them. for what is published on them. This is a link to my only official Facebook page that is documented, God willing. “

It is noteworthy that the artist Hanan Turk’s last television appearance is the series “Sister Therese”, which was shown in 2012, and the work discussed the relationship between Muslims and Copts, and was very successful thanks to two heroes who appeared in work events, in which two characters appeared, the first a Christian woman and her name Therese, and the second a Muslim girl called Khadija, until events reveal that they are sisters.