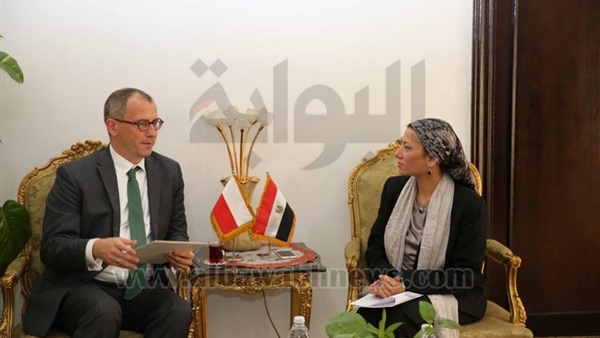 Dr Yasmine Fouad, Minister of the Environment, Mihaw and Abinda, met with the Polish ambassador in Cairo to discuss ways of cooperation between the two countries.

During the meeting, the Minister called for the support of an Egyptian global initiative to promote the application of an ecosystem-based approach based on nature in order to consistently counteract loss of biodiversity, climate change, soil degradation and the ecosystem that will be launched at the 14th Biological Diversity Conference in November. In Sharm el-Sheikh, where Egypt managed to gain the support of the Conference of African Ministers of the Environment, the Conference of the Arab Ministers of the Environment, the Global Fund for Environmental Protection, the Green Climate Fund and many countries around the world.

Fouad stressed that Egypt supports negotiations at the 24th Conference of the Parties on climate change to be held in Poland in December.

The Ambassador of the Republic of Poland emphasized his support for Egypt in the organization of the 14th Conference of the Parties to the Convention on Biological Diversity.

During the meeting, both sides looked forward to promoting bilateral cooperation between the two countries in the field of environmental protection of common interest.