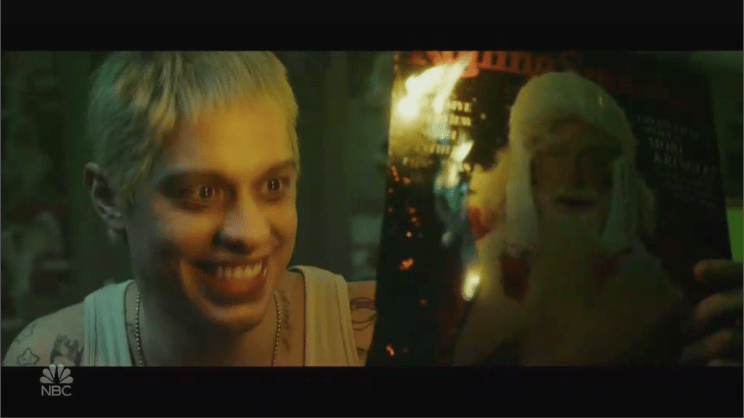 Before “state” became the slang term for an obsessive fanbase, it was the hit from Eminem’s 2000 album The Marshall Mathers LP. Now, two decades later, comedian Pete Davidson parodies the song from Saturday Night Live, turning it into a twisted Christmas anthem, “Stu,” and the rapper himself gets into the fun.

With hair lightened to blonde, like Eminem’s in the late 1990s and early 2000s, and in a white T-shirt, like Devon Sawa in the Stan music video, Davidson went down the basement stairs to write a letter to Santa. Surrounded by cut-out photos of the merry Saint Nick, he began: “Dear Santa / I can’t believe the year is almost over / it’s getting colder, I’m a year older, but I’m still your soldier.”

Instead of nostalgia for his love for the man in the red coat who brings joy and gifts to children all over the world, Davidson’s song turned into a request for one gift he wanted this year, which is “the only thing keeping me alive / Dear Santa bring me a PS5.

He rapped: “I tried to buy one at Walmart / I was running around the mall like Paul Blart / I tried to find one for sale / but the point is, they aren’t all / yo, I even went to Gamestop / but then it was like,” Oh wait , stop “/ Santa Claus can do one, a man has his own workshop”.

He also borrowed some of the original lyrics, such as “I know you probably hear it every day” (only instead of “I’m your biggest fan” as in “Stan” he continued this line: “you have a nice hat”) and “I even have a tattoo with With your name on the breast. “

The sketch for the music video aired on December 5 on a late night comedy series that featured this week’s guest Jason Bateman as Santa Claus. Chloe Fineman, Kyle Mooney, and Beck Bennett were playing elves in Santa’s workshop, who was increasingly concerned about the constant letters Stu gave them.

After his first reply was missed, Stu Davidson re-wrote, with text stating, “If you can’t help your biggest fan, you should just retire / or the next time you slide down my chimney, I’ll set your butt on fire. . “

In Eminem Dido’s “Stan” she sang the chorus, and Kate McKinnon played the role in “Stu”. But Eminem and Sir Elton John also made a duet with the song at the 43rd Annual Grammy Awards, so Bowen Yang also performed with Rocket Man for the verse.

“Stu is waiting for his surprise / he will open a PS5 / he just really wants to play /” Assassin’s Creed “at Christmas / but he can’t buy it himself because he lost his job because he was robbing his boss / I would be worried, Stu is a terrible / terrible guy” McKinnon sang.

Yang’s verse was: “This year Christmas is going to be bad / Because Santa Claus sucks and Stu is sad / He already asked very nicely, and now he’s really pissed off / I’m just telling you because I like you a lot / I” big fan of Santa Claus / and I also want PS5, PS5 ”.

In his last letter, Davidson was in the car and recording himself driving in the rain: “Dear Mr. Holly Jolly son of a bitch / I hope you break the sleigh and end up face down,” Davidson knocked the end. “I don’t think the great Santa Claus can even track down PS5 / Hey Santa, I drank a fifth of eggnog, do you dare to drive?”

At the end of “Stan” Em finally replies to the writer with his own line, so naturally Bateman turned behind the microphone, so to speak, simply saying, “Dear Stu, I think you misunderstood the address bro. I’m not Santa Claus, bye. “

Eminem appeared at the very end of the video, shown on the television screen in Davidson’s basement. While he had recreated caricatures of Santa Claus earlier in the film, the screen switched to colored stripes before showing off a gift labeled for Shady from Santa. Eminem showed up wearing a Christmas sweater, revealing he had received a PS5 despite “not even asking for it”.

“I think Shady must have been a good boy this year,” said the rapper. – Sorry, Stu, you screwed up.

“Stan” was released as the third single from “The Marshall Mathers LP”, which was Eminem’s third studio album. It was nominated for five MTV Video Music Awards in 2001, as well as a BET Award for Video of the Year and the Best Song Award from MTV Europe Music Awards.