The use of antibiotics in Turkey is the highest in Europe: the WHO report 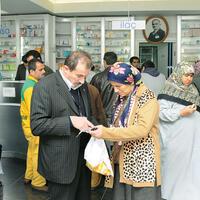 Turkey has awarded the highest number of antibiotic use in over 38 defined daily doses (DDD) per 1,000 people in Europe, where the average consumption of antibiotics is almost 17.9 DDD per 1000 inhabitants per day, according to a report by the World Health Organization published on November 12 .

The report entitled "Report on the surveillance of antibiotic consumption" showed that the total number of antibiotics and pharmacological consumption in Mongolia was the highest among all countries surveyed, with 64.41 DDD per 1000 people.

The big difference in the use of antibiotics around the world indicates that some countries are probably abusing antibiotics, while other countries may not have sufficient access to these life-saving drugs, said the report, adding that the WHO European region had almost a four-fold difference between the lowest and most consumer country in the region.

"The abuse and misuse of antibiotics are the main causes of antimicrobial resistance." Without effective antibiotics and other antimicrobials, we will lose our ability to treat common infections, such as pneumonia, "said Suzanne Hill, director of the Department of Essential Medicines and Health Products at WHO.

'The conclusions from this report confirm the need for urgent action, such as the enforcement of prescription-only rules, to reduce the unnecessary use of antibiotics,' she added.

In a report published in 2017, the WHO suggested that the consumption of antibiotics in Turkey is among the highest in the entire WHO European region, and the use of antibiotics is the main cause of antimicrobial resistance (AMR).

According to this observation, the Organization for Economic Co-operation and Development (OECD) warned in a November 7 report that antibiotic resistance is the highest in Turkey among OECD countries.

"Average resistance values ​​in Turkey, Korea and Greece [about 35 percent] they were seven times higher than in Iceland, the Netherlands and Norway, the countries with the lowest proportions [about 5 percent]"There has been a report.

At least one-third of medical recommendations in Turkey include an antibiotic, board member of the Turkish clinical microbiology association and an epidemic of communicable diseases (KLİMİK) said last October.

"Turkey is the main consumer of antibiotics in OECD countries," said Ergönül, adding that new infections are resistant to all kinds of antibiotics.

To address this growing problem, the Turkish health authorities have implemented a series of integrated interventions with the guidelines and support of the World Health Organization WHO indicated in its publication in 2017.

"The Ministry of Health of Turkey supports the hygiene of hands to prevent AMR resistance.A new electronic control system has been developed to monitor and control the use of antibiotics.The system follows prescription data and provides feedback to physicians.This is one of the countries that pioneered the supervision of resistance to antimicrobials in Europe, 'the report reads.