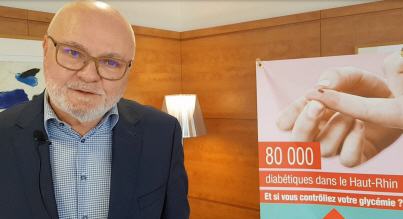 Eric Dehling, your association is involved in detecting diabetes in Haut-Rhin. Is our region particularly affected?

Yes, diabetes is 3e cause of death in Upper Rhin, while it is only 5e position at national level. Our region is 2e in the diabetes number ranking, according to Hauts-de-France. The number is steadily increasing: in Haut-Rhin, it increased from 75,000 in 2018 to 80,000 patients in 2019, not to mention people who do not know each other.

Detection of unknown diabetes is under control of blood glucose levels in Mulhouse and Colmar?

Yes, it has been found that when you have a day to control your blood glucose, 8% of the people you control suffer from diabetes without knowing it. This is the main problem of this disease, which does not hurt, does not show special symptoms. You can live very long with unknown diabetes. This means that there is no treatment and this is the reason for further complications.

How do you know if there is a risk of developing diabetes?

Traditionally in the family, we were worried whether we have grandparents or parents with diabetes, because until recently it was thought that the hereditary factor was the only factor that led to diabetes. Everything has changed since then. It is generally believed that there are three causes for diabetes. The first is hereditary, although it is important to specify that you will not necessarily have diabetes if your family is diabetic. The second reason is the environmental factor: our lifestyle, our diet can cause diabetes. The third factor is emotions, which are not much talked about.

Emotional shock at the professional level, at the level of family life, for example, the death of a loved one, married life and even social life can cause diabetes, that is, lead to poor pancreas functioning and poor absorption of insulin in the body. When people are asked about the history of diabetes and when they met, they very often refer to events from their own lives. We've been talking about it for about ten years. Until then, it was thought to have no effect, just as diabetes was thought to be hereditary.

Do you suffer from diabetes without knowing it?

To know your blood sugar levels, control operations are organized by the Insulib association, departmental council and the Regional Health Agency (ARS) in Haut-Rhin:

– Information stands and blood glucose monitoring will be offered to the public on November 8 from 9am to 5pm at Colmar County Council headquarters.

– From November 15-30, at Mulhouse, Insulib is organizing blood glucose control for people in a variety of locations, including the Mulhouse market.

– Until January 15, 2020, ARS offers free glucose control in pharmacies. This pilot operation takes place only in four Grand Est departments – Haut-Rhin, Marne, Meuse and Vosges – thanks to cooperation with 130 pharmacists.