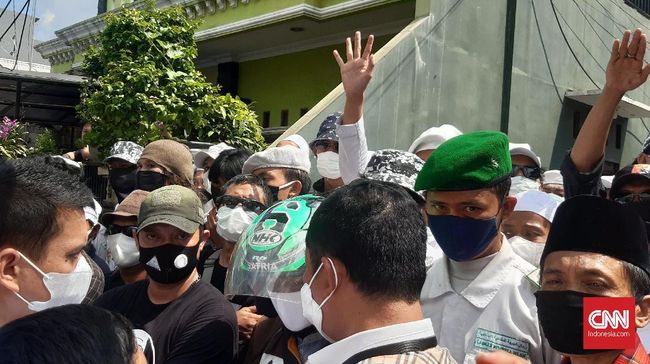 Lots of investigators Polda Metro Jaya was flooded with curses and criticism from the masses and supporters of the Islamic Defenders Front (REIT) when trying to visit Rizieq Shihab, Tuesday (12/02).

It is known that investigators Polda Metro Jaya sent a second summons after FPI’s High Priest refused to be questioned the day before.

They were blocked by FPI Laskar guarding the location. Laskar’s party asked authorities to wait for reconciliation with Rizieq’s family.

In the 45 minutes that the investigators had not met Rizieq’s family to make a summons. Negotiations were difficult. The process was accompanied by constant shouts and curses.

Not seeing a bright place, the police decided to leave this place. They, and the media crew that reported, were “showered” with curses. Journalists are also intimidating.

“Get out, Lu!” They called out, ordering police and reporters to leave the site.

Rizieq Shihab was summoned by Polda Metro Jaya in connection with a public case on the Prophet Muhammad’s birthday on Saturday (14/11). Rizieq was due to be questioned on Monday (December 1) but did not respond to the summons. Due to this absence, the police sent a second summons today.

In addition to Rizieq, Polda Metro Jaya also called on many people associated with the crowd. Among them are the Governor of DKI Jakarta, Anies Baswedan and Lurah Petamburan Setianto.