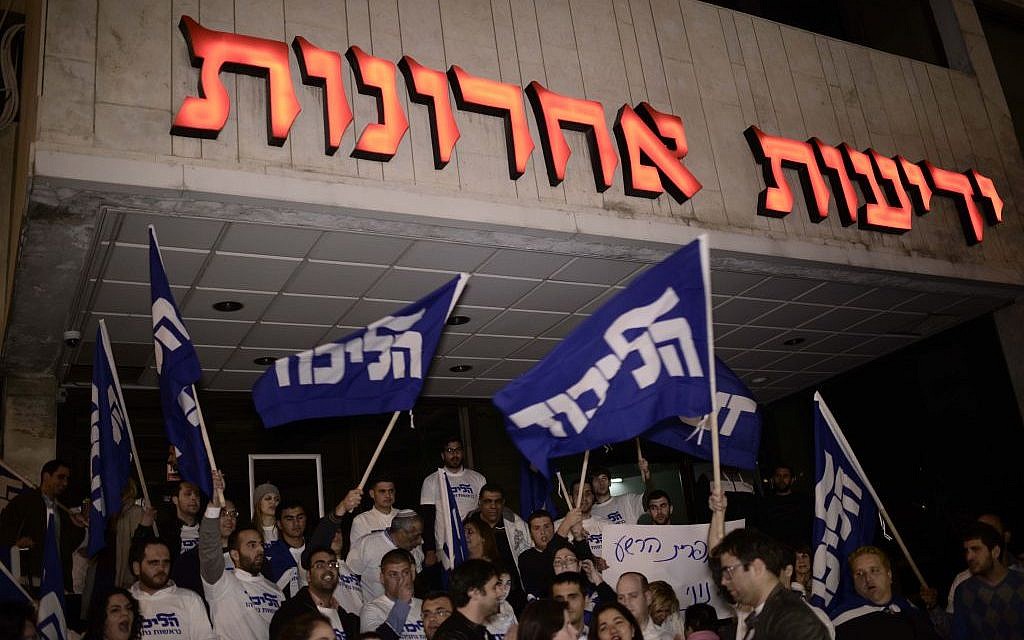 Prime Minister Benjamin Netanyahu is heard apparently negotiating with a prominent Israeli newspaper publisher for more favorable coverage while later threatening to retaliate "with all the tools at my disposal" against news items he deems too personal and negative, in recordings aired on Israeli TV Saturday.

The recordings are part of an investigation in which Netanyahu is facing possible criminal charges for his role in an alleged 2014 quid pro quo deal with Yedioth Ahronoth newspaper publisher Arnon Mozes that would have seen the premier receive more positive coverage by the tabloid in exchange for weakening its main rival, israel hayom.

The affair, known as "Case 2000," is one of three in which Netanyahu may be indicted in the coming months. Mozes may also face charges as part of the scandal.

The recordings were unearthed in a separate investigation of former Netanyahu aide Ari Harow, who was present at the meetings between Netanyahu and Mozes and who allegedly taped the conversations. Harow has since turned state’s witness. 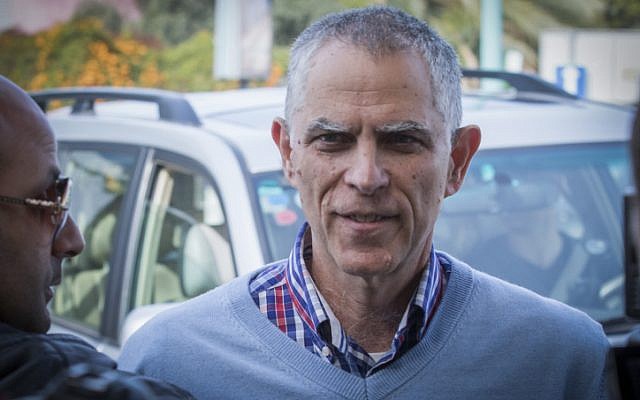 They were aired by the investigative show "Hamakor" (The Source) on Channel 13. While news organizations have reported on transcripts of the recordings, the actual audio had not previously been made public.

In the recorded conversations, which took place in late 2014, Mozes is heard offering to publish opinion articles written by someone approved by the premier while also proposing to run negative news items about his political rivals, all while under the impression Netanyahu may be open to backing legislation that would hobble free newspapers like Israel Hayom.

That paper, bankrolled by American billionaire Sheldon Adelson and considered very pro-Netanyahu, is handed out for free and has seriously hurt Yedioth’s circulation figures over the years. The alleged Netanyahu-Mozes agreement was never implemented.

The conversations took place after a bill requiring Israeli newspapers to charge minimum fees passed the first of three readings in the Knesset in November 2014, apparently catching Netanyahu off guard. The legislation, dubbed the Israel Hayom bill, was drafted by then Zionist Union MK Eitan Cabel, who has faced police questioning in the case. Mozes is believed to have been the bill’s mastermind. Cabel has denied any wrongdoing.

Weeks after the bill was advanced, in December 2014, Netanyahu dissolved the Knesset, ushering in new elections and thwarting any efforts to further advance the legislation. 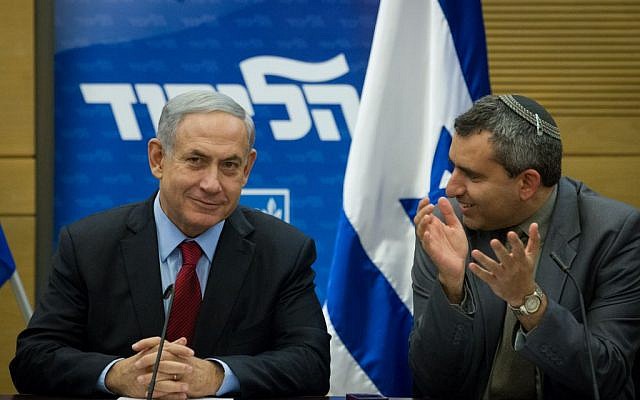 Benjamin Netanyahu (left) with MK Ze’ev Elkin during a Likud faction meeting at the Knesset on December 1, 2014. (Miriam Alster / Flash90)

Explaining his move to elections at the time, Netanyahu pointed the finger at his then coalition partners, ministers Yair Lapid, head of Yesh Atid, and Tzipi Livni, then leader of the Hatnua party, accusing them of coordinating a "putsch."

Days after the dissolution, Netanyahu can be heard in one of the recordings suggesting to Mozes that the legislation could still pass with broad agreement from other party leaders, despite the Knesset term ending.

"We can legislate this, that’s all," Netanyahu says in the recording aired by Channel 13, adding that it could be done "in agreement with the others" during the transition.

Mozes appears open to the idea, according to the recorded conversation, inquiring as to which committee would oversee the bill. "We'll set up a special committee," Netanyahu responds.

In a recording dated December 4, 2014, Mozes tells Netanyahu to bring in someone the next morning to write favorable articles.

"Nu bring. Before the legislation [is passed], before everything. A goodwill gesture, ”Mozes is heard saying.

The two then discuss several candidates, including Ronen Shoval, the former head of the right-wing organization Im Tirzu, an idea rejected by Mozes. They also discuss a go-between who will coordinate between the Prime Minister’s Office and the editors of Yediot, and Ynet, the newspaper’s sister organization and Israel’s most widely read news website. 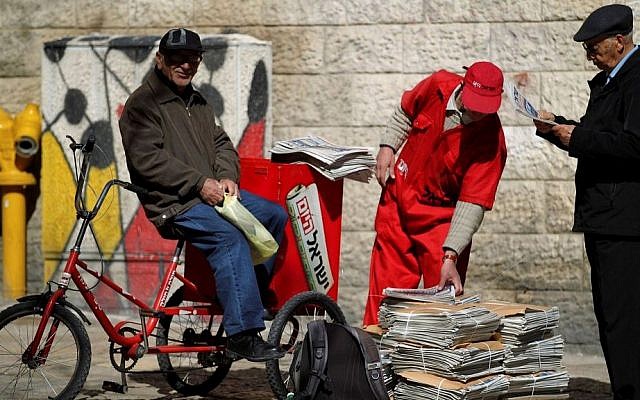 Netanyahu can be heard urging Mozes to "moderate" the so-called anti-Netanyahu contributors and to "balance out" the newspaper’s biased coverage, as perceived by the prime minister.

In a number of instances, Mozes says he supports Netanyahu’s leadership and indicates he could help ensure Netanyahu remains prime minister, even offering political advice. He also refers to previous coverage by the newspaper which he says helped Netanyahu become prime minister during his first term in 1996.

Mozes and Netanyahu also discuss details of the legislation, with Mozes saying the premier could back a bill that would argue that a newspaper with a circulation above a certain number cannot be distributed freely.

Netanyahu then voices a desire to see Naftali Bennett’s nationalist Jewish Home party stay below 15 seats in the coming elections. According to Channel 13, the comment was meant to guide Yedioth’s coverage. Three days later, Ynet published an article fiercely critical of Bennett. His party fell from 12 seats to eight in the March 2015 vote.

After Mozes leaves that meeting on December 4, Netanyahu tells Harow in the recording: "He’s a very dangerous character, you realized that?"

In a transcript of a conversation between a police interrogator and Netanyahu about the meeting, Netanyahu at first denies asking Harow to record the sit-downs with Mozes and later says the recordings were made to protect himself and to ensure that “the country knows who it is dealing with. "Netanyahu further said Mozes" ruled the country in secret. " 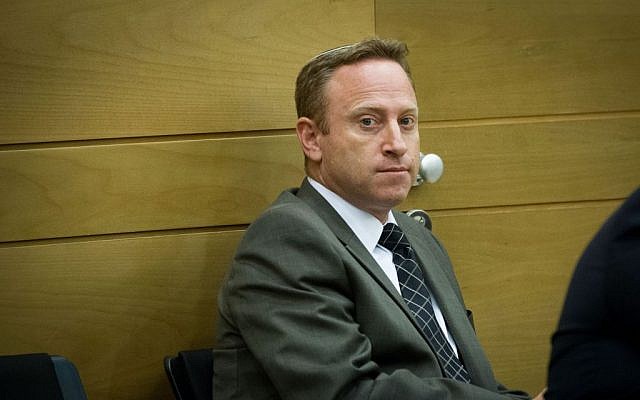 In their next recorded meeting on December 13, 2014, Netanyahu appears to backtrack on his support to push for the legislation in a special committee, telling Mozes that the timing was not ideal and that his advisers, Likud ministers Ze'ev Elkin and Yariv Levin , had warned against the move.

Mozes proposes the Israel Hayom bill be brought before the committee overseeing the proposed bailout of Israel’s then-Channel 10, the precursor of Channel 13, which faced a financial crisis. Employees of the station have long accused Netanyahu of holding a grudge against the channel, which had aired several prominent exposes about Netanyahu and his family.

When Netanyahu demurs in the December 13 recording, Mozes says he is disappointed and angry, telling the premier that he was led to believe the legislation would be advanced and that he would not have to wait until after elections when a government would be formed.

Netanyahu then brings up Yedioth columnist Igal Sarna, a fierce Netanyahu critic who has since been sued by the prime minister for defamation. Sarna had published a Facebook post critical of the Netanyahu family, and the two argue about the timing of his post and a separate article in the newspaper about Sara Netanyahu which the prime minister deemed unfavorable.

"I cannot let this pass. If in fact I need to fight you with all the means at my disposal, then I don't have a choice, "Netanyahu threatens.

Netanyahu tells Mozes that he will back the legislation on its own, but "if you come for me, I will use all the tools at my disposal to fire back … And this is something that can be avoided."

The recordings were broadcast a day after Channel 12 aired a report which said that Israel Hayom's Adelson told fellow tycoon Arnon Milchan that he was not prepared to do anything that could remotely be perceived as illegal in support of Netanyahu's efforts to secure better press coverage for himself , fearing they could all end up in prison together.

The reported comment broadcast on Friday came from leaked transcripts of a conversation between Milchan and former Netanyahu adviser Nir Hefetz, who turned state’s witness last year in a series of corruption investigations implicating the prime minister.

According to the report, attempts were being made to try and broker some kind of deal between Sheldon Adelson and Mozes in which Adelson would reduce his paper's circulation, from 250,000 copies per day to 85,000, in return for Mozes ending legislative efforts to ban free papers like Israel Hayom.

In the transcript excerpts quoted on Friday, Milchan tells Hefetz that the only involvement Adelson is willing to consider is to buy Yedioth. 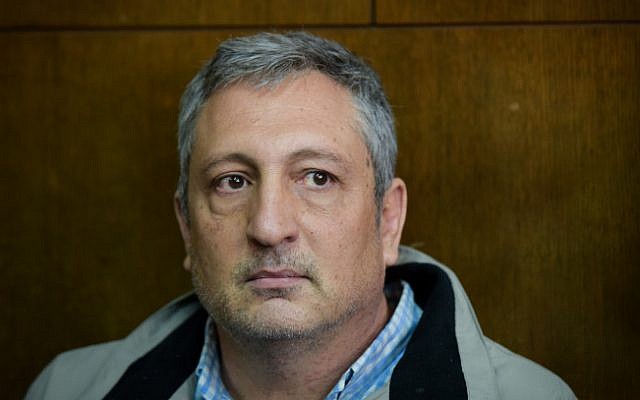 The Milchan-Hefetz conversation, which was recorded by Hefetz, is part of Case 2000.

Netanyahu is suspected of illicitly receiving gifts such as champagne, cigars and jewelry valued at some NIS 700,000 ($ 201,000) from billionaire benefactors Milchan and James Packer, and allegedly reciprocating in Milchan’s case with various forms of assistance.

Netanyahu is facing breach of trust charges in both of those cases and breach of trust and bribery in the third case, known as Case 4000, in which he is suspected of pushing regulatory favors for Shaul Elovitch, the controlling shareholder of the Bezeq telecommunications group, in return for ongoing positive coverage from Bezeq's Walla news site. 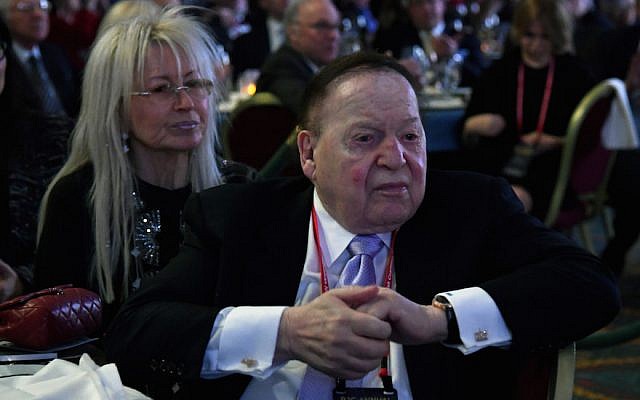 Adelson, a business magnate, major political donor, and philanthropist who has given testimony in the investigations against Netanyahu, is not a suspect in any of the cases against the prime minister. His wife Miriam Adelson, an Israeli who was recently made the publisher of Israel Hayom, has also testified and is also not a suspect.

Netanyahu, who denies any wrongdoing, has repeatedly claimed that he is the victim of a witch hunt by the media, the left, police and the state prosecution, designed to oust him from power.

Attorney General Avichai Mandelblit is expected to soon reach a decision on whether to indict Netanyahu in the three corruption charges against him. He aims to make the decision by mid-November, Channel 12 reported earlier this month. Other assessments suggested a decision would be made by year’s end.

The legal woes come as Netanyahu is fighting for his political survival, with the country’s unprecedented second election of the year again failing to provide him with a clear victory.

In last month’s election, neither Netanyahu nor his chief challenger, Benny Gantz, secured the required parliamentary majority to form a new government. Both men have expressed support for a unity government as a way out of the deadlock, but they remain far apart on who should lead it and what smaller parties would join them.