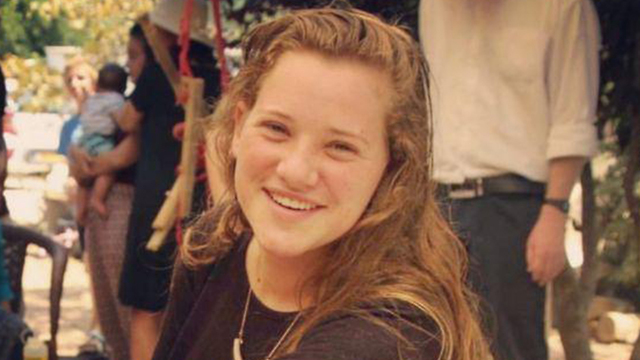 Israeli security forces arrested the terrorists involved in the murder of 17-year-old Rina Shnerb, who was killed in a bombing in the West Bank
last month that also wounded her father and brother, the defense establishment said Saturday.

Rina was killed, her 19-year-old brother Dvir was seriously wounded and her father Eitan was lightly hurt when they were hit by an improvised explosive device as they were visiting the Danny Spring – named for another Israeli terror victim – near the West Bank settlement of Dolev.

The three suspects, all residents of the West Bank and members of the Popular Front for the Liberation of Palestine, were detained in a joint operation involving the Shin Bet domestic security service, the Israel Defense Forces and Israel Police.

The mastermind behind the attack is 44-year-old Samar Arvid from Ramallah, who is considered one PFLP’s senior officials in the West Bank. According to the military, Arvid constructed the bomb and detonated it when he noticed the Shnerb family approaching the area. The 44-year-old had been arrested in the past for his involvement in terror activity, primarily during the Second Intifada.

The second suspect is 25-year-old Kassam Shabali, from the village of Kobar, who was also arrested in the past on suspicion of involvement in terror activity. According to the Shin Bet, Shabali was the one who made the explosive material from which the bomb was constructed.

The 25-year-old Yazen Majamas from Ramallah is the third suspect apprehended in the operation. He was previously detained for being involved in operating grassroots terror cells. The Shin Bet said he was not involved in the direct planning or the execution of the bombing.

The three were also involved in the planning of other attacks, including shootings and kidnappings. In addition, during the interrogation, the security services uncovered another explosive device belonging to the terror cell.