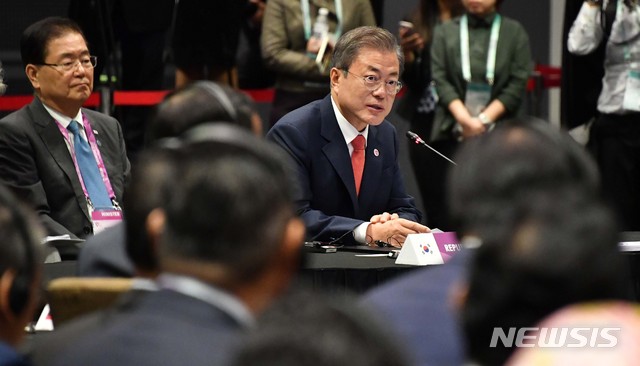 US Vice President HONG KIM JEAN, Vice President Mike Fence, said on Dec. 15 (local time): "We need to make progress in achieving final denuclearization (CVID) in a complete, verifiable and irreversible manner." I will continue to try this part, he said.

"I think there has been a lot of progress, but there is a lot to do," said Vice President Fenice after the meeting with Moon Jae-in at the bilateral meeting of the Suntec Congress Center in Singapore.

"I told President Bush that he would like to thank President Trump for showing his full partnership in the collective efforts to denuclearise the Korean Peninsula," he said.

"President Trump and Kim Jong-un expect a second round of talks between leaders of North Korean rule," he said. "As we tighten our ties more closely, we will ultimately take action to ensure security and peace on the Korean peninsula." He explained.

"I think President Trump said that if it comes to the next summit, it will be the perfect basis for the common goal of the long-term denuclearization of the Korean Peninsula."

"There has been significant progress in many joint efforts, there are no more missiles, no nuclear tests, no hostages," he said referring to the meeting with Japanese Prime Minister Shinzo Abe in multilateral diplomacy. We shared with them that there was a lot of progress. "

"I thought it was a great honor to see the return of the remains in Hawaii," he said. "We look forward to the more important activities North Korea is undertaking in the future and ultimately to achieve our common goals." .

He also mentioned the solidification of the ROK-USA alliance.

"The Alliance is a very important alliance, because it is an alliance created not only for the Americans, but also for the fight for freedom," he said.

"I think the best time has come for people from both countries," he said. "I think we're waiting for this part, I hope we have the chance to work together to make these things happen sooner."

"I think the trade deal between Korea and the United States is also an opportunity to renegotiate," he said, "I am grateful for the active support of this part."