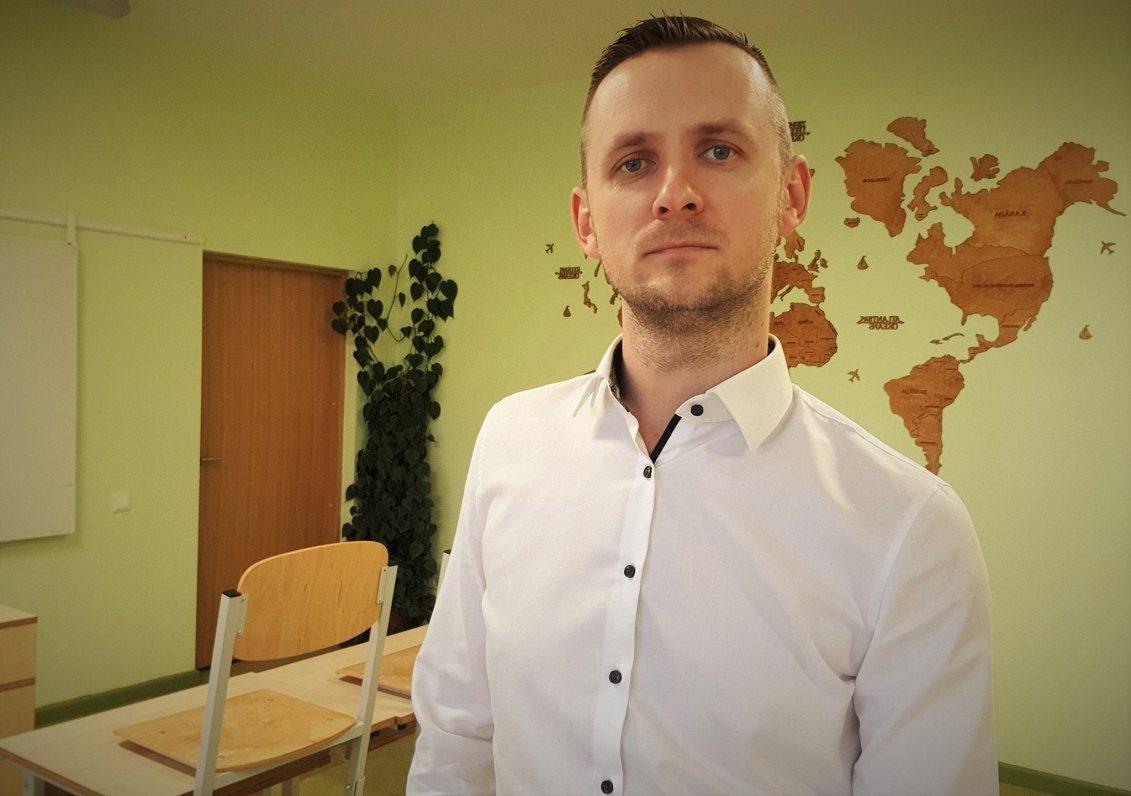 Last weekend, many users of the social network “Facebook” flew to Latvia in a video in which the director of Līvāni Secondary School No. 1 wisely explains the new learning procedure in school due to the limitations of Covid-19. Filming himself, walking through both school buildings, feeling both teacher and student, explains how to wear masks and invites you to look at the corridors from the bright side – you will be able to see when the principal comes to work! The 37-year-old businessman Gatis Pastars became headmaster of his family’s first high school in Līvāni two years ago, pledging to give the school a new lease of life. How is a large school of over 500 children in Līvāni dealing with the difficulties of the Covid-19 time and looking for ways to communicate more effectively with parents?

Some commented on a video from the Gat Pastara School that has now been watched almost 240,000 times – is this young boy really a director? The latter laughs at how young at heart he is than his age, but he doesn’t consider his own video editing something special – he has been doing it since the start of the spring pandemic, looking for new ways to reach out to parents when face-to-face communication is difficult.

“Video editing, creating special effects, 3D composing and things like that have been connecting me for several years. Rock music is my hobby, we have a band called Jauda and we make our own movies. I also perfect my skills there, ”Pastar reveals another aspect of his personality.

However, choosing a college was not his goal to become headmaster of the first school – Gatis Pastars is an entrepreneur with a master’s degree in management. Once he worked in the financial sector, was a training trainer, then he returned to his native Livani and continued his activities there. “I did a lot – from training, mentoring, audio recordings to growing earthworms and producing substrate. I found it interesting to differentiate the risk, ”he says.

The young businessman quickly noticed the commune and was invited to participate in the elections. On becoming a member of Livani County Council, he also noticed problems in the work of his former school. “It wasn’t a very clear stage for Līvāni High School because there was a certification scandal,” Pastars recalls.

In the summer of 2018, it was made public that the then-headmistress had gone abroad on vacation without many graduates signing certificates that could threaten their admission to the university. “At that time, the public and the authorities overseeing Līvāni High School were very reluctant to take such a step. As a councilor, I found it unacceptable that this was happening at my school, where I was learning on my own feet. He wanted to change something. One option would be to insist and put pressure on the executive that this and that should be changed, or try to do it yourself with your own example, ”he says. When the competition for the position of school head was announced, Pastars applied.

“We took a risk: a principal who is not from the school community, who has been an entrepreneur for more than nine years, and now suddenly changes something so radically – what will happen now?

There was a great scandal, various accusations were made in my direction, but that did not make me a better or worse candidate. It was just people’s opinions that were not based on a real understanding of what I am really capable of and what my vision was, ”says Gatis Pastars. According to him, two years later, ballast cups took the opposite position.

“We are a good core at school – teachers, technicians, school parents’ council. This year we have a really fantastic advice from school parents – parents who are very willing and supportive. We are looking for a different way to communicate and build relationships. We think of school not as an organization or building, but as a process. And everyone learns, ”says enthusiastically the principal of Līvāni Secondary School No. 1. He is also currently on his way to a second master’s degree and plans to become a computer science and math teacher. He has already taught high school economics.

“I see a lot of things that can come in handy with my previous business experience.

I don’t teach young people about dry economics, but the real things I went through were wrong and I got hit in the back.

There are a few things I can do to knock these sometimes self-confident young people out of their comfort zone, and these are the most valuable lessons. Later on, on graduation and graduation nights, we talk informally and get real feedback not only as a teacher but also as a director, ”says Pastars.

Gatis Pastars also talks about school life in the Covid-19 pandemic as vigorously and unstoppably as about anything else related to his work – how to reach parents who do not go to “E-class” or read carelessly letters posted there director? How can I ensure my children are safe at school? And how to show that working remotely is not recreational, but brings them closer to burnout? It turns out that the video from the social network “Facebook”, which is so popular with parents today, can be a good additional channel.

“If this content appeals to them, this is an opportunity to pass it on to other parents. If we’re talking about this particular movie – I can’t even explain why it became so popular – only the parents of our schoolchildren could tell us how we would live. Since there were a lot of worries, they asked me in “E-class”, “WhatsApp”, “Facebook” and on the street by my parents – director, how will it be, will we go to distance learning? Nobody wanted to learn remotely, ”Pastars recalls.

“The parents were the most happy when they wrote: we understand what is happening at school. Because now we live in such a way that parents are not allowed to go to school.

Therefore, it is very important not to lose touch with your parents in this pandemic, she emphasizes.

The latter is convinced that if parents and children are honestly explained by both sides of the coin for any restrictions, they will be more willing to accept them. This also applies to the last requirement – to observe an area of ​​three square meters for each student during the lesson.

“At meetings, I remind teachers – we are the first to come to parents with a message! We try to tell as much as possible about the situation on both sides. (…) If you tell the full picture as it is, parents will think about it and it will be easier for them to make these new decisions. We got an even more favorable attitude towards those 3 square meters in our school because everyone was afraid we would leave. If this is the price we have to pay, then both we and our parents are willing to pay it. We have no drastic objections or claims, ”says the director of Līvāni Secondary School No. 1.