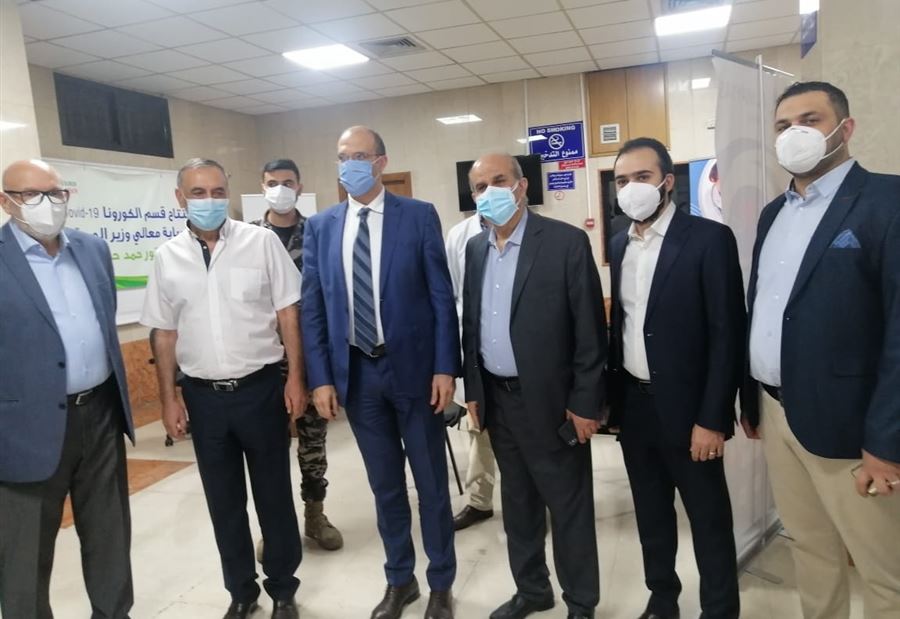 The minister of public health in the welfare government, Hamad Hassan, inaugurated the Corona ward at Al Mayas Hospital in Chtoura, Bekaa.

During his tour of the emergency department and some parts of the hospital, Hassan praised “Al-Mayas Hospital and Qassem Hammoud’s step, which was never far from taking responsibility to the people of its region, and today we are witnessing the opening of the Corona department, and how I reported about the increase in equipment and the number of rooms is a sense of responsibility. ” I know that I have experience in this hospital and Chtoura Hospital in terms of health and safety standards ”.

Hassan emphasized that “The Crown is still going on and we are still working to increase readiness, and we pay tribute to the Mayas Hospital management for this responsible step, which belongs to the category of reducing the pressure on our people and saves them the hassle of traveling to the capital, which in fact stood with zero ICO ”.

He added: “We currently have six ICU beds and ten regular beds for coronavirus patients, in addition to other institutions, but they are numbered, and we are also on a date with a well-functioning hospital that will provide us with a coronavirus ward, and we encourage and urge all hospital institutions to engage in fighting this epidemic in order to save our people and thus One could speak of exercising the law, with full transparent audit as the Corona files will be paid after a month from the date of the audit, and there is also an additional step that we have succeeded in achieved thanks to a loan from the World Bank to cover the financial ceilings of hospitals opening a Corona branch.

He continued: “We, thanks to our capabilities and the certain help that reached the army, I think we could have given you some of the aid given in connection with the Corona epidemic, and that is our feeling about the financial crisis facing private hospitals, but not it is legitimate to face this epidemic or avoid responsibility Unfortunately, the Corona counter the day before yesterday increased by 1,809 injured, and yesterday it reached 1,850 injuries.

He added: “Yesterday I spoke with Prime Minister Hassan Diab about the scientific recommendation we made three days ago to close larger areas. We know that the closure of the country is an issue that can be interpreted. We have made a recommendation as a scientific committee as part of the agreed decisions to extend the area and the area to the red area and there will be an actual closure and this does not mean that we will close a village, city or town that unfortunately has not been closed on site or involved, and we often see it. ” .

He said: “In turn, we call on all municipalities to take responsibility by treating and taking responsibility very carefully for the lives of their citizens, so that we do not endanger the lives of those we respect and their son, and congratulations to Al Mayas Hospital on this initiative that should be repeated in all regions. Lebanon “.

Hassan concluded: “The main problem is with medical supplies. We sent a letter to the Governor of the Central Bank of Lebanon, Riad Salameh, and asked him to secure $ 200 million from hospital owners’ accounts to supply hospitals with Corona-related medical supplies, so that treatment would be good on the matter and the ruler’s treatment would be positive in government hospitals and we hope the relationship with Corona private hospitals is positive and we hope that we will be positive with the new government in terms of equipment facilities ”.

Elon Musk defeats Bill Gates and becomes the second richest man in the world … How much is he worth?

Women and Children / 5 Natural Recipes for Heartburn … Find out about them – Khabar Masr: Egypt’s news