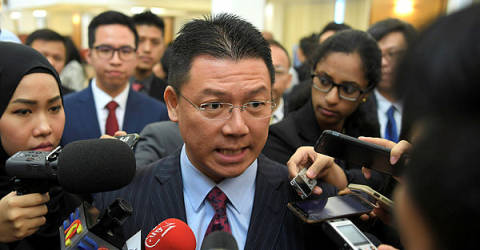 KUALA LUMPUR: All legislators are advised to reduce the number of cigarettes smoked to avoid the possibility of additional by-elections.

"I understand that Kapar always defends the rights of smokers in this country, but I would like to advise you, reduce the number of cigarettes consumed.

"This is for the health of all and that there will be no by-elections," he said, joking while closing the budget of the Ministry of Health for 2020, here yesterday.

In defense of Abdullah, Sani said he was not an avid smoker and that he only represented the voices of all smokers in the country.

Earlier, the PKR man asked Health Minister Datuka Seri Dr. Dzulkefly Ahmad to consider providing smoking corners or rooms in all restaurants after smoking was banned at the premises of the ministry.

He said imposing a prohibition discriminates against smokers, arguing that while smoking may be unhealthy for oneself, the government should also respect the rights of those who ignite.

"There are about nine million smokers in Malaysia who have expressed dissatisfaction with being treated as third-class citizens. I hope the minister will develop a solution that is beneficial to everyone, "he said.

In reply, Dzulkefly said that the decision was made in the interest of non-smokers who are forced to inhale passive smoke, in particular those more at risk, such as children, pregnant women and the elderly.

"The main purpose of this smoking ban in catering establishments is to avoid second-hand smoke reaching its unintended purpose. We want to reduce this exposure to non-smokers. We are not going to wage war on smokers, ”he said.

Nevertheless, Dzulkeflye said the ministry would discuss the suggestion of Abdullah Sani with the Ministry of Housing and Local Government.