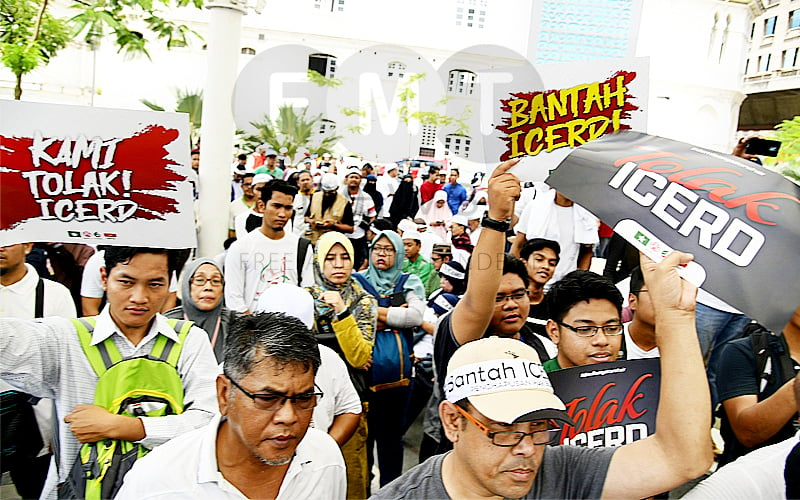 KUALA LUMPUR: Over 2000 people gathered to protest Putrajaya's plans to ratify the UN International Convention on the Elimination of All Forms of Racial Discrimination (ICERD).

Protests are organized by the Umno and PAS youth wings.

Asyraf said that today's protest was only the beginning, because similar meetings would take place in other states.

"We go from state to state to make people understand the issue and not get involved (PH leadership).

"If you're still arrogant and want to continue with ICERD, you'll see 10,000 demonstrators in Kuala Lumpur," he told the crowd at Sogo Mall.

He also said Umno and PAS had to work together on the matter.

Khalil questioned the need to strengthen ICERD as people live in harmony.

"According to the federal constitution, Islam is an official religion, and other species and religions are not discriminated against," he said.

The "Allahuakbar" and the "Haper ICERD" (get rid of ICERD) can hear the masses who were mostly white as a symbol of protest.

This comes from several Heads of Government, including P Waythamoorthy, Prime Minister of the Prime Minister's Office, announcing that the ratification ICERD's speech will begin in early February.

The reason for this is that the ratification of ICERD is contrary to Article 153 of the Federal Constitution, which favors Bumiputeras.

It appears that Article 153 is contrary to Article 2 (2) of the ICERD, which states that any measures taken to develop or protect that racial group are to be abolished within a reasonable time.

Waythamoorthy has previously told FMT that Article 2 (2) of ICERD is not contrary to Article 153 because positive discrimination or affirmative action can not be considered to be completely discrimination. He also stated that ICERD could be ratified in a sustainable way.

According to ICERD, the parties are "justified by the circumstances" to apply discriminatory policies for racial groups that have previously suffered discrimination to "guarantee full and equal enjoyment of human rights and fundamental freedoms".

Policy has been internationally aimed at overcoming inequalities in employment, education, pay, and so on in the world.

Waythamoorthy also said his government is committed to ratifying UN human rights conventions, of which only three have been signed by Malaysia since 1995.

ICERD resumed last month in parliament after speaker Khairy Jamaluddin recalled Putrajaya that ratification of all UN treaties would "have an impact" on racial discrimination if it is applied as a law.

Prime Minister Mahathir Mohamad has since signed the ICERD, but he warned that it would not be easy.