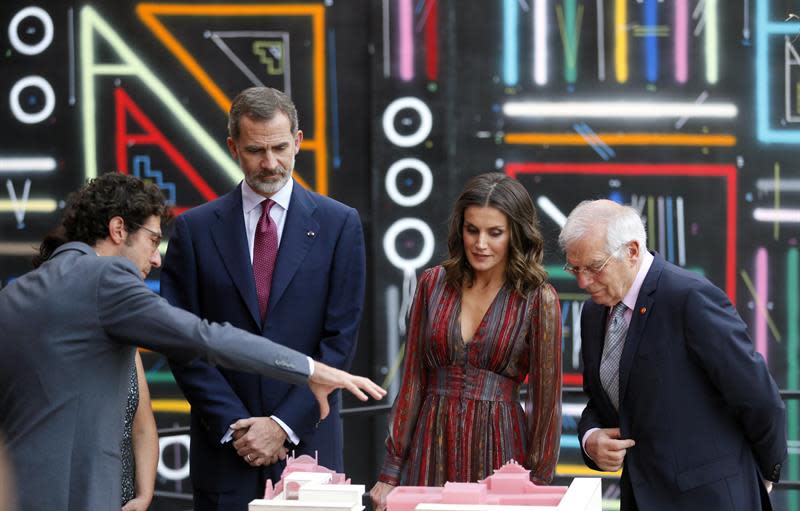 Lima, 13 November (EFE). – King and Queen of Spain talked today with a group of Peruvian artists and gallery owners about the preparations for the next edition of the ARCO Madrid International Art Fair, which will take place in February next year. Peru as a guest country.

On the second day of their visit to Peru, Felipe VI and Queen Letizia took part in the Cultural Center of Spain in Lima, where they were received by the Culture Minister of Peru, Patricia Balbuen, director of the National Museum of Reina Sofía in Madrid, Manuel Borja-Villel and director of ARCO, Carlos Urroz.

After considering the model with the reform project of the cultural center itself, the kings visited the exhibition "States Migratory", a small exhibition with the work of the ARCO Foundation and Art Center Dos de Mayo (CA2M), which are part of the work of five Peruvian artists.

Before the meeting with artists and galleries, Don Felipe and Doña Letizia took part in a conversation between Borja-Villela and the institutional commissioner of the Peruvian pavilion at ARCO, Jorge Villacort, on the objectives of Peruvian attendance at the Madrid trade fair.

The President of Peru, Martín Vizcarra, confirmed yesterday his intention to take part in the inauguration of the new edition of ARCO and stressed that the "great Peruvian cultural presence" planned in Madrid will mark the commemoration of the bicentenary of independence and contribute to "confirmation of historical and cultural ties" between the two countries .

The selection of the program "Peru in ARCO", which aims to popularize the work of Peruvian artists from the last century to today, brings together the most international generation of artists in the country, many of whom are less than fifty years old. They have developed a significant part of their careers in other countries.

The program will include seven galleries in Peru, four Spanish, one German and three American, which will be joined by representatives of the Andean country in other parts of the fair, such as Daniel Jacoby, Daniela Ortiz and Lúa Coderch, which will allow us to introduce collectors, professionals and the general public has a full panorama of contemporary Peruvian artistic creation.

As for the institutional pavilion of the Peruvian state, it will be intended for new technologies, with an experimental video environment and sound, and as a conceptual reference to the Amazon of the Amazonian indigenous indigenous community that serves as a meeting point and knowledge in the cities of the Amazon.

The artistic scene of the Andean country will also be reflected in Foro Perú, a platform for reflection and exchange among professionals organized as part of the fair with the participation of artists, historians and curators who will propose talks on the specificity of Peruvian contemporary art and its cultural and social challenges.

In parallel with the participation of the ARCO gallery, the Peru Cultural Ministry has also organized an ambitious program of exhibitions and events in various areas of the Spanish capital and region to present a wide representation in Madrid of contemporary Peruvian art.