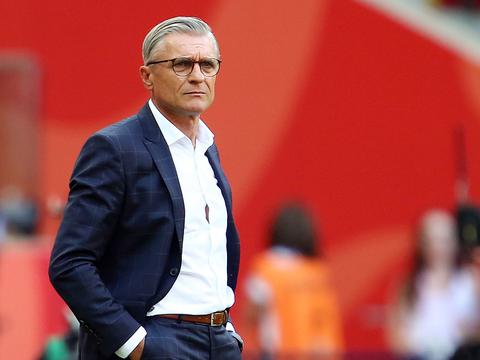 After the defeat of Lechia 0: 1 at Bułgarska, it was decided to release Serb only after four months of work. For Lech it was a very uncomfortable situation, because earlier they declared that the employment of a former footballer and coach of youth groups is a project for years. However, this did not happen – a series of three defeats in a row, including the Polish Cup with I-league Rakow Częstochowa poured a bitterness. Even before the match with Lechia, the first conversations with Nawałka took place regarding his work in Poznań, but he was not interested in taking over the team at the beginning. It seemed that it would end like a temptation by Legia or Zagłębie Lubin. Now, however, this is another time, three months from the proposal of Dariusz Mioduski and longer rest. Przałałka thought about the matter and eventually, after further pressure, decided to undertake more serious discussions. He gave a signal that there is a chance to negotiate to a happy finale, and the project of rebuilding Lech seems to him interesting and would treat him as a big challenge. For the time being, the former selector only had a telephone contact with the heads of Lech. This is expected to change over the coming days, when it will present its prospective employers with a vision of their project. And this is demanding and contrary to earlier reports, it is not limited to June. Nawałka is considering signing a longer contract, but it all depends on the upcoming talks.

Fulfilling what conditions would be required by Nawałka? It is known from today that the trainer is very demanding and caring for the smallest details. He would like to have an impact on all aspects of the team's operation, to look after the smallest details, such as logistics or the organization of the day spent by the players in the club or on clusters – as was the case in the representation. Considering the difficult situation of Lech, not only sports, but also image and limited fans' confidence, the club is in a situation where it should meet most of the points from the list of trainers. The most important is primarily the employment of your training staff – and we are not talking only about the two most important assistants: Bogdan Zając and goalkeeper coach Jaroslaw Tkocz – but a wider group of associates. Nawałka would also like to have a big impact on the transfers and reconstruction of the team in the winter – not necessarily under the watchful eye of the transfer committee functioning in the club for years. It was he who would have the final sentence to bring to the team.

Nawałka is interested in working in Poznań. At the same time, we know that in addition to talks with Kolejorzem, he has an initial proposal from China. There, however, he would have to wait until 11 November and finish the season. Only then would he know more details. However, working in the Far East is not certain, so if the talks with Lech were finished positively, he would take a job in the premier league. For Lech, such a solution seems like a hit. First of all, the position and opinion of the former manager despite the unsuccessful World Cup is still very strong in the country and would satisfy the expectations of frustrated supporters, which could not be said about employing a foreign coach – even with quite a good CV. In Poznań, it is burning heavily, and a coach who would have been a national team for many years has been coming to Bułgarska, which has been a great success for which the entire nation was proud. For this popular, with great charisma and character, impeccable presence, and most importantly – from the sports side able to organize the team, build and create their players. Employment Nałęczka certainly would attract a lot of interest, but above all peace for a long time. And although the price will probably be high (although the salary of the trainer itself is not a problem), this move can pay off to Lech.