Home / poland / Employee Capital Plans in practice. You can save in old age, you can have an additional bonus from the company

Employee Capital Plans in practice. You can save in old age, you can have an additional bonus from the company 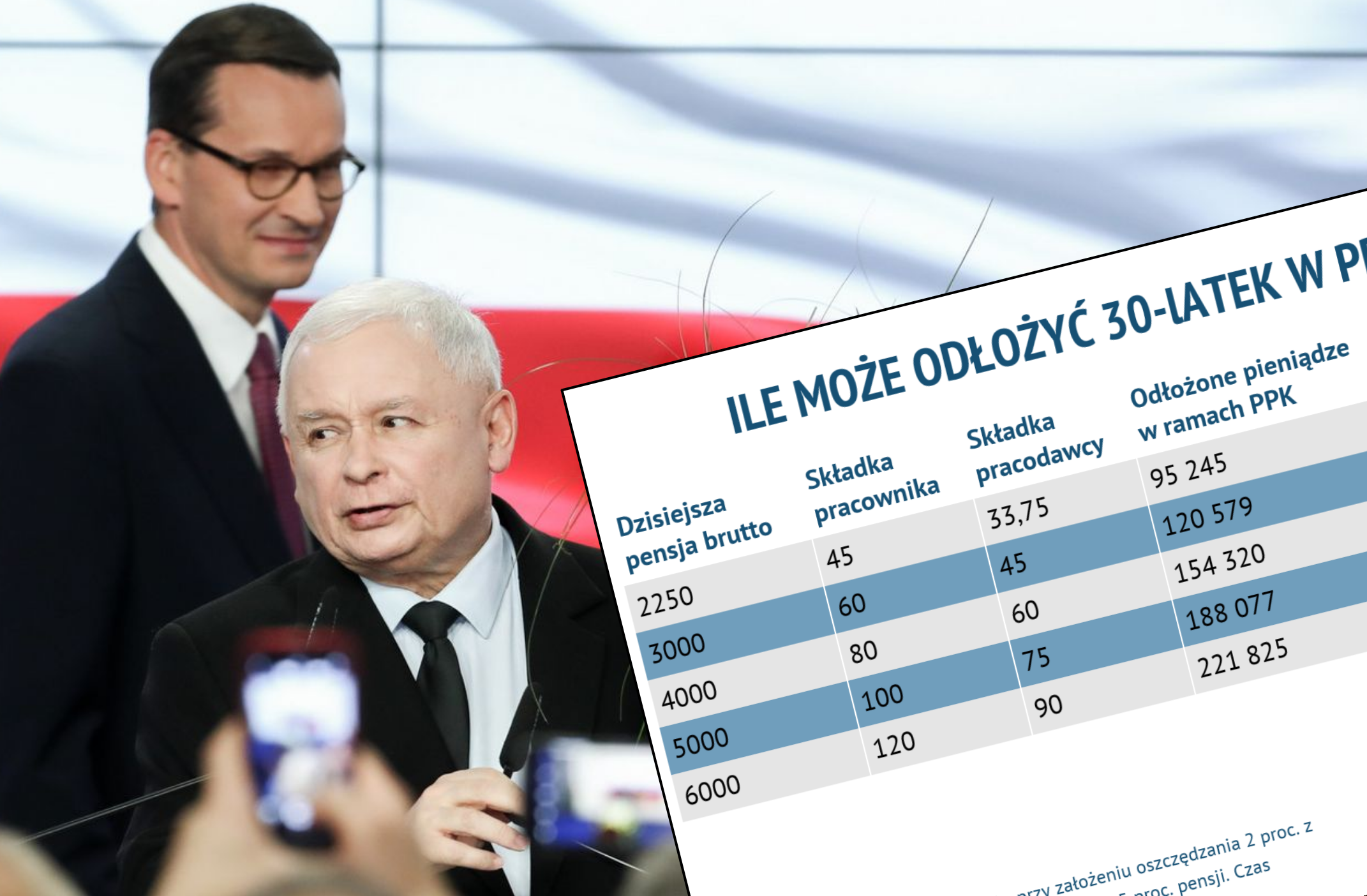 Every month you have a payment of 4 thousand. PLN gross? In a year you will save 1.2 thousand zł. Of this, over PLN 500 will be a bonus from the employer. This is a raise that the company cannot escape. She'll have to give her. And payment will be possible at any time. Within ten years, the amount of savings will soar to over 12 thousand. zł. Earned interest will also be added.

These are the amounts of saved and withdrawable money after just one and ten years of savings under Employee Capital Plans. Although the program "tailored" is for many years, … money can be selected at any time. And repeat over and over again. Every month, every quarter, every six months or every five years.

See also: Anna Dereszowska saves. Everything to have a better pension

And PPK can be treated as a guaranteed raise from the employer. Why? Because he will add to Employee Capital Plans, he has such an obligation. Unless of course his employee decides to participate in the program. The employer will not put anything into the proverbial sock. Only their own money will go there.

You don't trust the state and the largest financial institutions? You do not need. – Money collected under Employee Capital Plans is completely private. And this means that you can have them at any time, withdraw and spend – says Paweł Borys, president of the Polish Development Fund.

At the moment, nearly 3 million Poles decide whether they want to save with their employer and the state in old age, or prefer to do it alone. From January 1, 2020, another group will face this dilemma. These will be those who work in companies employing up to 50 people.

What is going on?

Salary smaller by a small amount, but more money for "autumn of life" – these are the assumptions of the program. As part of Employee Capital Plans, it is the employee, employer and the state who are to jointly blame themselves on the financial future of Poles.

The system assumes that all employees aged 19 to 55 will be enrolled in the PPK. In total, it is up to 11 million people – 9 million working in the private sector, 2 million in the public sector. All employees for whom pension insurance contributions are paid will be connected to PPK – irrespective of the form of employment. However, self-employed workers will not go here.

From the moment you subscribe, a small percentage will be charged to your salary. It is to be at least 2 percent. from the gross salary – but already collected from the net salary.

Example – earning PLN 3,000 gross, we will spend PLN 60 per month on PPK. It must be remembered that the employee contribution will be charged on payment to the hand. Therefore, we will see a smaller transfer from the employer on a monthly basis.

The employer will also drop the monthly contribution. In the basic version he will contribute 1.5 percent from himself. also calculated from gross salary (in this case PLN 45). Here, however, the rate will be his additional cost of employment, he can not take anything from the employee.

To this, every year, the state will add to the amount of PLN 240 (or PLN 20 per month). This is the third pillar of PPK.

With a salary of 3,000 PLN gross – during the year exactly 1.5 thousand will appear on your account zł.

Payments are possible at any time

Money can be withdrawn at any time, although it will be slightly smaller. In total, own contributions can be recovered at any time – 100 percent. The payment of funds from the employer is possible in 70 percent. The remaining 30 percent goes to the ZUS account, so he doesn't disappear. Will be back years later.

Quicker resignation means no payment from the state. Because it is money encouraging people to stay in the program until they are 60 years old. And it pays off anyway.

The employee mentioned at PPK paid 720 PLN during the year. His employer an additional 540 PLN. However, there will be 1098 payable (720 PLN for an employee and 378 PLN for an employer). The remaining PLN 162 will be credited to the ZUS account – they will be added to the invoice, everyone will collect it in old-age benefits. There will also be interest – a few dozen zlotys in total. You don't have to give up PPK payments to get money out of them.

Employee Capital Plans can also be treated as an alternative to saving on a bank account. And again it is best to show it by example. If you put PLN 80 a month in a savings account for 10 years, then you will pay about 11 thousand from the bank after that time. PLN (after paying the tax). At the same time, you can withdraw from PPK – if you give up saving – about 21 thousand. zł. Why this difference? Because 7 thousand PLN to PPK paid for you by the employer. Apart from PPK, no one offers such bonuses.

The longer, the greater the profit

Of course, those who put off as long as possible can benefit most from PPK. Firstly, they accumulate considerable equity, secondly, the employer will add a lot, and thirdly, the investment time will be longer. By default, the program ends when you reach the age of 60 – then you can withdraw funds without giving away part to ZUS and returning bonuses from the state.

The second table ideally shows how much the delay time affects performance. A person who starts an Employee Capital Plan and is 30 years old today (35 years of work) will put down much less. Putting aside a small percentage of the minimum wage, he accumulates 95 thousand. zł. This will guarantee a 908 PLN supplement, which will constitute 15 percent. last salary. Working in turn for 4 thousand PLN in total after 35 years, the amount of 154 thousand will appear on the PPK account zł. It gives PLN 1,472 to the pension supplement, which is 14 percent.

The third table, in turn, shows how much will put today's 40-year-old. For 25 years of work for 3,000 PLN gross will appear on the account 68 thousand. PLN savings. It is worth emphasizing that only 60 zlotys will flow out of your monthly salary. This amount in old age will allow for 10 years of installments of 649 PLN. It's about 11 percent. last salary.

How did we count? We have made cautious assumptions. And so we decided that the salary of the person putting aside in PPK will grow at a rate of 2 percent. during the year. What is worth adding – the simulation does not assume a change of job or period of unemployment. The annual rate of return on investment of PPK money was set at 2 percent. It is also a cautious approach – usually the Ministry of Finance assumes 3.

At the same time, we assumed that both men and women would work until the age of 65. Therefore, in total, three simulations were created – for a person who is 20 years old, today he starts work and has 45 years of putting away, for a 35-year-old person with 30 years of work perspective and for a 40-year-old person who has 25 years of putting away . At the same time, we assumed that the accumulated capital will be paid out for 10 years, i.e. it will be transferred to the senior in 120 installments.

The basic scenario in the case of PPK assumes a one-off payment of 25%. after reaching the right age. The remaining 75 percent it will be paid in installments and paid out within 10 years. This arrangement guarantees release from the so-called Belka tax and is suggested by the developers of the solution. A one-time withdrawal is also possible, but will be taxed. We assumed that the funds would be evenly distributed from the first to the last day and it would be 120 payments.

Money in Employee Capital Plans will work for all years – they will be invested by Investment Fund Societies. And it depends on the rate of return on these investments. Keeping it stable for such a period of time is not easy – worse and better periods may occur in the global economy. It is worth remembering.

aaaWhy does PIS want to take people money from OFE pension funds next year? And now they did PPK – another machine for picking up … Read all

UnionBujda and hypocrisy, give up PPK !!