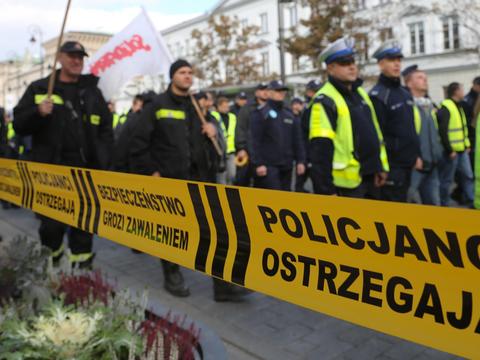 "There are already units in which 90 percent. police officers on redundancies, such as the command in Sochaczew, in which out of 150 policemen there were 20 and only the management. All subordinate police stations and posts are closed, and interventions will be taken by heads and managers "- this is a fragment of one of the letters sent to Fakt's editorial office in recent days. "In Kostrzyn nad Odrą a police station was closed in the morning. All policemen, except the commander, are on L4. There are no patrols, no one is guarding the city! "Is another letter.
The police say, for example, that "at the Road Traffic Department in Warsaw, everyone is on redundancies, and the National Police Headquarters pretend that nothing bad is happening." In the province Warmian-Masurian doctors spend about 30 percent on medical exemptions. officers. Michał Tyszkiewicz, a local journalist from Ełk, wrote on Twitter that "almost everyone on vacation" in this city. – There are no sections of traffic, misdemeanors, prevention, district, and in criminal three people are still at work. The patrols and commanders are on patrols, and on November 11 they will probably close the command – he adds.
In Podlasie "sick" 20 percent police officers. And the peak of "sickness" is to fall on the next few days. Policemen laugh that they suffer from "dog flu". And the head of the Ministry of Interior breaks down over the protest. – I believe, perhaps in a naive way, that no one has been reluctant to do so irresponsibly – Brudziński said in Łódź. Then he was surprised that the police did not protest during the PO government when they were deprived of pension privileges.

– I do not know why suddenly the policemen get sick so much. Could the autumn weather affect it? Maybe … – Deputy Minister Jarosław Zieliński, responsible for the police.

And yet the government has allocated 6 billion zlotys for the modernization of uniformed services, proposes increases. In desperation, the National Police Headquarters offers every policeman who will be on duty on November 11 … 1000 PLN gross extra allowance. And who will protect us before and after the national holiday?

He attacked his victim with a knife – do you know that person?

All the police on L4?

Alarm and barrage in the police? They are afraid of the uniform