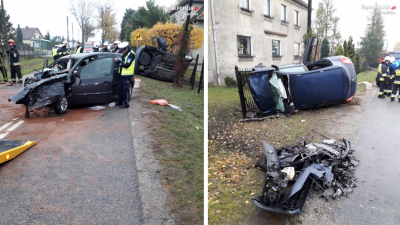 The 42-year-old Ford driver and 41-year-old passenger were killed on the scene at the Markowice (Śląskie Voivodeship) in a tragic traffic accident. A drunk driver entered the car with his car. The perpetrator of the accident deprives himself of 2 to 12 years of freedom.

Łódzkie: Two people died in the fire in the house in Skomlin

Two people died in a fire that broke Saturday in the Skomlin (Łódzkie) family home on Saturday, said the press spokesman …

The accident happened on Saturday at 12.30 on the street Odrodzenia Markowice (Śląskie Voivodeship). The police found that the accident was a 36-year-old Pajęczna resident driving a Renault car driving to Markowice to Raszczyce and a second road to Racibórz. The 36-year-old renault descended to the opposite track for unknown reasons and faced the Ford Fiesta. Two cars hit the 42-year-old driver and 41-year-old driver killed on the spot.

It turned out that the leader of the fiesta was raucous, 1.3 percent alcohol.