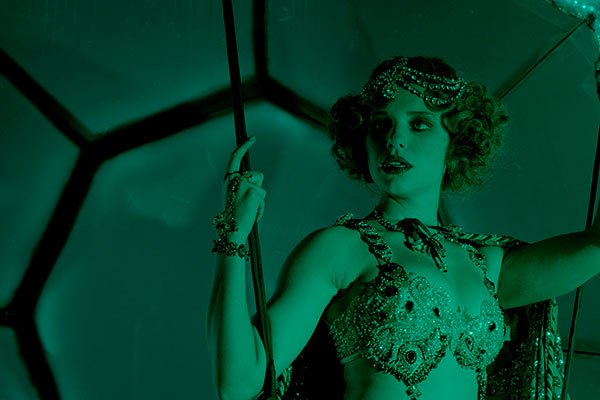 Because we know each other, Cacá Diegues was a devotee of the works of the poet Jorge de Lima. The pseudonym of the poet is due to the fact that half of his literary work consists of poems and sonnets. But Jorge de Lima also wrote novels along with his The Invention of Orpheus, a poem that challenges classifications due to the diversity of forms and rhythms. This fascination of Jorge de Lima is a work of life on the part of Cacá. Twelve years ago, he made his last film as a director, The Greatest Love in the World. He did not remain idle. He produced a lot, wondering what he would like to do.

He returned to Jorge de Lima. He chose The Great Mystic Circus, a little because of the performance with the music of Chico Buarque and Edu Lobo – which he did not see, but the trail always accompanies him. "The poem tells the family's history for over 100 years, Fulano and got married, they had a son who did not know who, had a son or daughter who got married … And so goes to two girls on the trapeze."

With writer George Moura, it was a great difficulty to create a narrative structure that would fill this age. "We used Comet Halley's route through Brazil and created" meneur du jeu ", a circus presenter, Celavi, played by Jesuit Barbosa." The Great Mystic Circus opens this Thursday, 15, in rooms throughout Brazil. The film was already at the film festival in Cannes (outside the competition), opened Gramado and closed the Rio festival on the weekend. He is Brazil's candidate to stand for the Oscar. Cacá, who has already won at the Brazilian Academy of Writers, must now win in the Hollywood movie. The dispute will be tough, with heavyweight candidates. Germany (Never Look Away: Florian Henckel von Donnersmarck), Argentina (Angel Luísa Ortegi), South Korea (In Flames, Lee Chang-dong), Italy (Dogman, author: Matteo Garrone), Lebanon Nadine Labaki), Mexico (Rome Alfonso Cuarón), Poland (Paweł Pawlikowski's Cold War), Turkey (Nuri Bilge Ceylan Tree), etc.

In total, 87 countries compete for five places – a list of nine pre-nominated by the Academy will be announced at the beginning of the year. The last five only on January 22, 2019. Together with all other nominees. The award ceremony will take place a month later, on January 24. Caca is happy to be in this race again. You are the first to do something that may sound like self-criticism, but it can only be rush. "This is my most megalomanic movie, I never want to repeat this impression."

The problems of the great film were added to others with a more personal order. His daughter got sick – all right, but he did not want to talk about it – and production stopped. When he came back, there was another nightmare. The final effect – naked naked girls in the air – was made in France thanks to the co-production agreement. It turned out that it was more complicated than it seemed. It had to be reworked.

All this is a thing of the past. The circus, as a metaphorical representation of human greatness and misery, has already seduced writers such as Ingmar Bergman (Circus Circus), Charles Chaplin (The Circus), Cecil B. de Mille (The Greatest Show on Earth), etc. For Bergman, the greatest spectacle of that Chaplin responds to what is perhaps the smallest spectacle. Caca may be more on the side of the Frenchman Max Ophüls, with his shortened masterpiece – Lola Montès. Ophüls, a waltz filmmaker, dreamed of a film in which the life of the heroine (Martine Carol) was counted, discontinuous, like a circus show. It was a film ahead of its time in the mid-1950s. It was crippled by producers. Ophüls died shortly after this.

Cacá lives and dreams about the next film, "Mała będzie dama", a story of a military dictatorship returning to its heritage. People who joined the armed struggle were arrested and expelled, and were gathered at home. Why, by whom? Settlement of bills? "Sure", and more Caca does not provide, a bit because of the spoiler, and also because it's an actor's movie, and he's still casting the cast. For now only The Great Mystic Circus. "Ladies and gentlemen," announces Celavie, "the show will start." Cacá put a lot of energy into this project. He knows that the year is difficult for Brazilian cinema, but he does not lose hope for good reception.