Hamdan bin Zayed: 2020 is a qualitative milestone in the UAE march 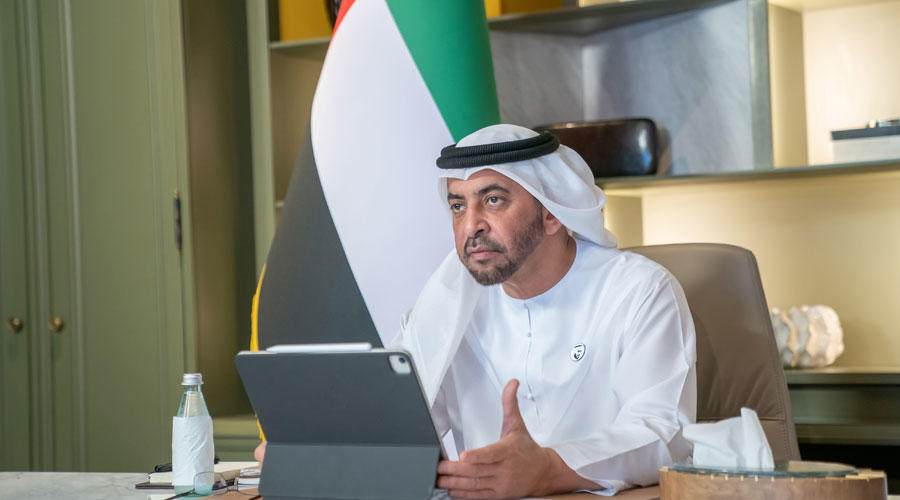 His Highness Sheikh Hamdan bin Zayed Al Nahyan, the Sovereign’s Representative in the Al Dhafra region, assured that December 2nd was a lasting memory in the hearts of the nation and an occasion for all, and a symbol of expressing feelings of unity, loyalty and belonging.
His Majesty said – in a speech he gave through the magazine Shield of the Nation on the 49th National Day – that the United Arab Emirates is considered a global bright place of coexistence, tolerance, moderation and openness, in light of our wise leadership willingness to maintain a clear civilized model of development and development and ensure the highest level of our country Happiness and prosperity are not only for loyal people, but also for those who live in its good land, the land of goodness, happiness and self-sacrifice.
He added that the National Day is celebrated as special this year because it is witnessing a significant change in the country’s steps towards the future. The UAE today, after 49 years of their relationship, has become a major player in building the future and achieving sustainable development in all areas.
His Majesty said: “The forward-looking visions of wise leaders in the country have gone beyond adopting medium to long-term strategies. Rather, they went beyond when His Majesty Sheikh Mohammed bin Rashid Al Maktoum, the vice president and prime minister of the United Arab Emirates and ruler of Dubai, announced, “May God keep him.” »His Highness Sheikh Mohammed bin Zayed Al Nahyan, heir to the throne of Abu Dhabi and Deputy Supreme Commander of the Armed Forces, in December 2019 that 2020 will be” the year of preparation for 50 “to coincide with the preparations for the federation’s golden jubilee, which is in 2021 and the country’s development planned for the next fifty years, which will be strengthened. His achievements are increasingly entrenched at all levels. “
His Highness Sheikh Hamdan bin Zayed Al Nahyan added: “The country’s achievements in 2020, especially the launch of the Hope Probe to explore Mars and operate the first reactor at the Barakah Peaceful Nuclear Power Plant, have confirmed that this is an exceptional year in the development process that the country experienced in all areas and represents The current year is a qualitative milestone on the UAE road, through which it begins a new stage in a record period of accelerated economic, social and developmental renaissance in order to be the best in the world on its 100th anniversary.
His Majesty said: “On this day, we remember the founding father, Sheikh Zayed bin Sultan Al Nahyan, may God rest his soul and his brothers to the founding fathers and their role in building, development and a comprehensive Renaissance, until the country has become a role model in the world and a light that radiates hope to build a better future for the world. “
His Highness Sheikh Hamdan bin Zayed Al Nahyan – at the end of his speech – congratulated His Highness Sheikh Khalifa bin Zayed Al Nahyan, President of State, and His Highness Brother Sheikh Mohammed bin Rashid Al Maktoum, Vice President and President of State. The Council of Ministers, the Lord of Dubai, “God keep him” and His Majesty Sheikh Mohammed bin Zayed Al Nahyan, Duke of Abu Dhabi and Deputy Supreme Commander of the Armed Forces, their Highness Sheikhs, members of the Federation Supreme Council, Emirati Lords and distinguished Emirati people … National holiday All our people’s hopes for progress, prosperity and prosperity have been fulfilled. (YOU)