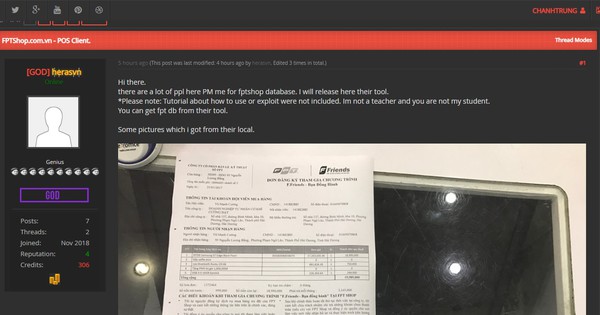 It is believed that the purchase invoices of users in the FPT store are still being attacked by hackers on the network. Photo: Chanh Trung.

Accordingly, on the night of November 13, hacking forums appeared on hacking forums containing sales data between customers and the FPT chain of stores, which many users are worried about.

Therefore, a member of RaidForums has the nickname "herasvn" still publishes information on the forum, which he keeps in the FPTShop customer database. To prove his claim, the hacker has launched a series of photos of the purchase contract between the customer and the FPT store, which contains all customer information, ID, purchase invoice ….

At the end of the forum post, the hacker "definitely" announced that he would provide specific information about the FPT Store data for those who accept the purchase of a "hacker" transaction.

On the same day, the network experts stated that the information regarding the FPT Store customers as stated above is not reliable. Experts said that if a hacker steals the FPT Store data, it can be statistical data, only tables. The appearance of transaction photos, as above, can come from every customer who bought in the FPT Store for purchase and interception. That is why it is difficult to trust this data and need to be further investigated.

Earlier, on November 6, also on the RaidForums forum hackers introduced information, it is believed that the data are employees of World of Sports. Then, on November 10, the hacker loaded files containing employee personal data and threatened to enter data into the FPT Store.

It is suspected that repeated cases concerning customer personal data have been disclosed on the Internet in recent days, which has caused many users to still be wrong. The Ministry of Information and Communications (MIC) cooperated with relevant companies to find out.