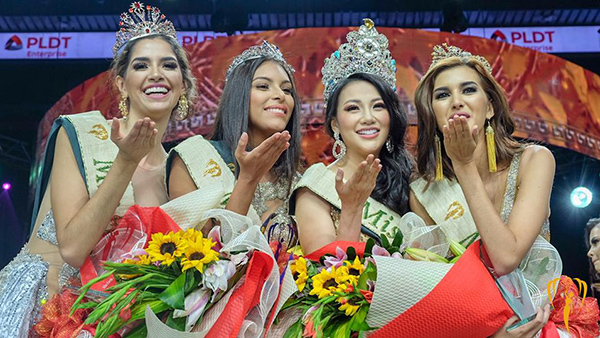 – Miss Earth competition was known only after the coronation of Phuong Khanh, poorly organized, low-quality players, even the crowned contest was offered for 4 million dollars (almost 100 billion).

Miss Nguyen Phuong Khanh: I do not care about marketing

Phuong Khanh, representing Vietnam, defeated 87 other countries to win Miss Earth 2018 in the Philippines on the evening of November 3.

The Vietnam Miss Universe competition was initiated in 2001 to appeal to the community to raise awareness of the environment. With such humanitarian meaning, Miss Earth was quickly welcomed by fans and attracted many countries.

However, over the past few years, Miss Earth consistently captured many scandals and scandals, which meant that the competition lost value and many viewers were rejected.

In 2010, when Ecuadorian Air lost his crown to get married, Russian beauty was chosen instead, although it was only in the first fourteenth. The recipients are not always interrogated, the next position will be the successor or at least the candidates in the ranking higher in the first 7 will not be a girl only in the lead 14.

GlobalBeauties report in 2013, The most famous scandal that Miss Earth has been eliminated from the Grand Slam system – the most prestigious GlobalBeauties beauty contest system is the case of Miss Mission Vice President, $ 4 million for the highest ranking in 2012.

In this connection, the Russian journalist Komsomolskaya Prawda played a businesswoman who met Miss Lorraine Schuck, vice president of Miss Earth, and applied for the prize.

The clip, which operated on social networks, showed that initially they offered $ 2 million, but Lorraine Schuck was hesitant: "I can not promise, it's not as easy as you think, we have prestigious international competitions and expensive brands, and if it's the highest level, its people can bring in an ad worth millions of dollars."

After the fake buyer quickly raised the price to $ 4 million (currently nearly $ 100 billion), the vice president said: "But not in this year's competition, if there is no problem, we will organize the first Russian in next year's competition, I will have to work hard with the judges!"

Talking about how to pay for massive cash prizes, Lorraine Schuck said that they could get a transfer under the name of the sponsor.

Later, Lorraine Schuck explained that the video had been cut and edited, but the explanation was unlikely because 4 million dollars were so obvious.

Not only Argentine and Ukrainian participants condemned that during the competition in 2012, several "specially selected" participants joined. Events and forced drinking with many buyers.

The beauty of Ukraine also revealed that she had heard rumors that Miss Czech Republic would be crowned on Miss Earth 2012 a few days before the finale, and the truth coincided with the rumors she had heard. okay.

Also on the rumors of classified competitors' liquor entrepreneurs, the Taiwanese participants of the beauty contest in 2015 condemned: "In three uninterrupted nights I had to move from one night club to another, dress up and dance with a lot of different men."

Later she shared that the organizers prepared food for the participants were very poor, when for dinner only a few pieces of bread, chilled in the cold with a few pieces of tomato sauce.

Information that Taiwanese beauties gave the public a wave of waves and feel that the representatives of beauty get too much compared to the expensive license fees that the country issued.

In 2016, Danish National Director John Paul Hamilton announced he would not send Miss Earth again because he thought Miss Earth was sleeping with the sponsor this year to win first place. .

John Paul Hamilton writes on social networks: "I heard news that Miss Ecuador (Miss Earth 2016) slept with one of the sponsors and promised that the crown would belong to her. I wondered about the organizers of the Ecuadorian Contest for Overnight Contest and exchanged flight tickets less than 4 days after the final But the result is the same, it's sad. "

Also in recent years Miss Earth has fallen sharply because of the declining quality of the players, and the Philippines have become the host of boredom and bad infrastructure.

If Miss Universe and Miss Universe require that athletes win official national titles to challenge, Miss Earth is much more liberal in licensing. Candidates must be paid only for the competition. For example, almost one-third of candidates in the first 18 of this year's competitions are "nominated" and not crowned in national competitions.

Miss This year the Austrian half of the Philippines took the 5th place in Miss Earth World Philippines 2016 and was chosen by Miss Universe AUSTRALIA to represent the country.

The Brazilian Miss Earth 2018 contest will take place in 2019. Therefore, the organizers encourage participants to apply for a post in 2018. Sayonara Veras representing the state Pernambuco entered the Top 15 Miss Brazil 2015 was selected for the title Miss Earth Brazil 2018 failed to pass any finals.

In addition, the competition was also presented by the audience more and more towards the "beauty fair", when the contestants on the stage in tight conditions, without light; The parade is rough, rough; Candidates constantly wear bikinis everywhere to attract public opinion; Candidates become advertising forms for the sponsor; Fastfood like fried chicken, fresh water is the main food for players, …

The social interaction in the competition is always low if the Miss Grand International contest was late, but the live broadcast had an average audience of about 100,000 people. Miss Earth is only about a third.

"There is no doubt that Phuong Khanh wins with Miss Earth"

As the founder of the project and following Nguyen Phuong Khanh from the first steps to Miss Earth 2018, Phuc Nguyen shared with VietNamNet his student right after her coronation.

The Dong Viet star congratulated the Vietnam representative before winning his story in Miss Earth 2018.

On November 3, the Miss Earth 2011 final was officially held at the Mall of Asia Arena in the Philippines.