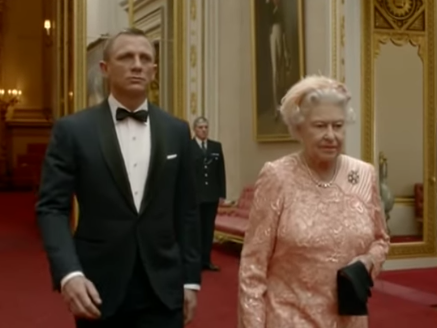 The Queen agreed to appear in a 2012 London Olympics James Bond sketch with Daniel Craig but only if she had a speaking part, her royal dresser has claimed.

Directed by filmmaker Danny Boyle and screened as part of the Olympics Opening Ceremony, the scene saw Bond escorting Queen Elizabeth from Buckingham Palace before parachuting into the Olympic Stadium alongside her – albeit with the Queen played by a stuntman in a wig for the second part of her cameo.

According to a new book by royal dresser Angela Kelly, titled The Other Side of the Coin: The Queen, the Dresser and the Wardrobe, Boyle first pitched the proposed sketch to her and the Queen’s private secretary Edward Young. Kelly then rushed off to ask the Queen if she liked the idea.

We'll tell you what’s true. You can form your own view.

"I asked him and Edward to give me five minutes so that I could ask the Queen," Kelly writes in the book, which has been extracted in Hello! Magazine. "I remember the look of shock on Danny’s face that I would be asking Her Majesty straight away, but there’s no point in waiting around with these things: if she said no, that would be the end of it.

"I ran upstairs and luckily the Queen was free. She was very amused by the idea and agreed immediately. I asked then if she would like a speaking part. Without hesitation, Her Majesty replied: ’Of course I must say something. After all, he is coming to rescue me. ’

“I asked whether she would like to say: ‘Good evening, James,’ or: ‘Good evening, Mr Bond,’ and she chose the latter, knowing the Bond films. Within minutes, I was back in Edward’s office delivering the good news to Danny — I think he almost fell off his chair when I said that the Queen’s only stipulation was that she could deliver that iconic line.”

Kelly’s book further reveals details about the Queen’s clothes and her interactions with notable public figures throughout the 25 years Kelly has worked for the royal household.

The book marks the first time a serving member of the royal household has been permitted to write about their experiences while still working for the Queen.